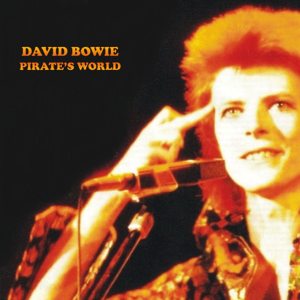 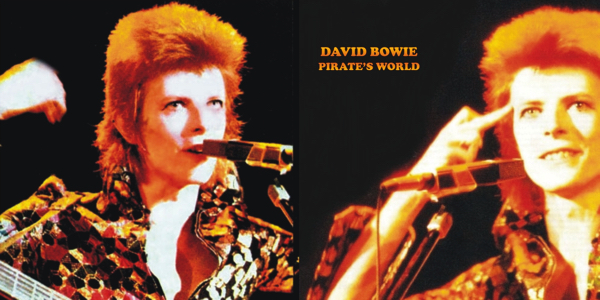 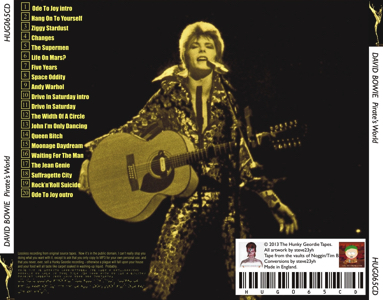 After Hang on to Yourself Bowie says: “Good evening,my name’s David Bowie and these are the Spiders from Mars” to which some from the audience responds “Hi dave!” .The Spiders start tuning their instruments and Bowie does the announcement: This song called Ziggy Stardust“. After the number is finished there follows another round of tuning .and 8owie’s explanation “Ah,let me tell you that we’re all totally out of tune.Ha!. But we’re gonna play” is answered by someone from the audience calling “OK,allright,no problem!”.
It is a fine concert,the backup singing in Five Years is good and the rest of the songs are also played very well. The audience are reasonably enthusiastic,they recognise most of the songs and listen with interest when after Space Oddity
Bowie dwells upon the following number.Andy Warhol: “Thank you. When we got to New York we had a painter who had painted K. Bowles and Manlyn Monroe…” – the rest is not very intelligible. After Andy Worhol Bowie introduces a new song: “I’ve a now song for you I’d like to do very much. I wrote it on the tram from L.A to Chicago before I came down here and I tried to write it on the tram journey from Chicago to here. l’m not quite sure if I’ve learnt it yet ,so we’ll see won’t we”. The audiencee laugh and applauds. “l’ll tell you what it’s about because I didn’t understand it when I wrote it” Bowie goes on and the attentive audience laugh again. “This takes place in – probably in Lye year two thousand and thirty three witch is a good year,and in that time it was after a catastrophic time of war and many people didn’t know how to make love,and they learn to make love by watching the video film of the era of the nineteen seventies and the nineteen eighties”. Again the audience applauded,and Bowie start to sing Drive in Saturday

iZotope RX denoiser used (one pass for most, additional pass for middle tracks) to remove hiss.
Three little gaps in the intro to Andy Warhol. Removed and tidied. Similar gap in intro to Drive In Saturday removed.
Gap (original tape flip?) between Drive In Saturday and Width Of A Circle. Removed but rather abrupt.
Actual tape flip at 5:49 in Width Of A Circle. Fade out/in, but only a couple of seconds of music is actually lost.
Couple of short cuts between Waiting For The Man and The Jean Genie. Crowd noise only and removed.