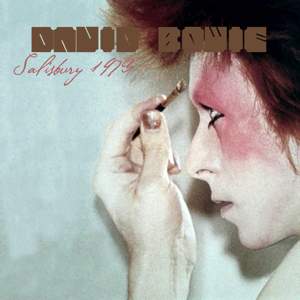 Bowie was on top of the PA and jumped down. When he landed he twisted his ankle hence the comment that he had hurt his ankle 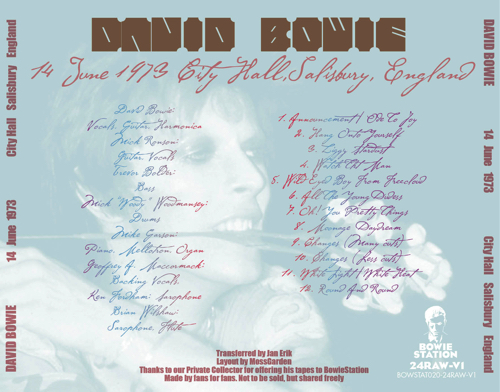 “Good evening Salisbury!” the announcer calls out,“during the course of this eve­ ning’s performance there will be a ten-minute interval,and at that time you can buy the offi­cial programme,T-shirt and posters of course, they’ll all be onsale outside in the foyer. Are you ready for Bowie?!” and the audience respond with hysteria “Yeah!”. “He’ll be with you in five minutes”. The Beethoven intro starts while the announcer is saying: “Welcome to the fan­ tastic and successful world tour,including the United States of America,Japan,now his home country the United Kingdom – DAVID BOWIE!”,then the concert begins.Then the tape proceeds with the yelling for an extra:“We want Bowie,we want Bowie”
Bowie returns on stage, talks a lot,not all of it can be under­ stood though: “About a year ago,January last year,we had audiences that were very much like you,and that we … rock bot­tom,and it’s very nice to play for you tonight ’cause we think you’re great. Mick thinks it’s great. Personally I think I’ve broken my ankle (Bowie was on top of the PA and jumped down. When he landed he twisted his ankle hence the comment that he had hurt his ankle) . No not really,but it hurts a bit,and we’d love to do a couple of numbers from that period when we were working,and this is a song by a very talented songwriter,I think probably one of the biggest songwriters of the Seventics called Lou Reed. This is one of his tracks,one of his very firs songs, and it’s called White Light White Heat“. “If you wanna make this next one work,you’ve gotta work together, ’cause I’m gonna do this one sitting down. This is an old one by Chuck Berry,and it’s called Round & Round“. After the song he receives thunderous applause and he says “We have to go now”,making it clear to the audience that there is no point in going on calling for yet another extra! “It’s been a pleasure playing here tonight”.
There is some confusion over this and the Newcastle tape: many of the copies are identical,but the fact that the announ­cer says “Good evening Salisbury” would imply that this is in­ deed Salisbury; there is also a genuine Newcastle tape though!