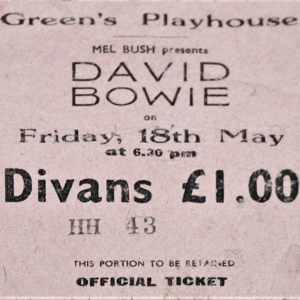 g+ sound (partly g-) after some EQ was done (some sound differences between songs were levelled). In the last third of Width Of A Circle the sound gets worse which I tried to balance as good as possible. Also later in the show (especially at the start of Suffragette City) the quality drops.

In contrast to the matinee show the evening show is quite inferior in sound. Not only the overall sound is inferior but also the quality during the show varies. But maybe the biggest flaw is that the audience is permanently clapping and screaming and the taper did not have such a good position as the one in the matinee show (was it the same taper?).

Some photos of that day from Glasgow : they are from the matinee or evening show.

The audience are cumpletely out of their minds ,and although they are no more than 3,500,they sound like some 10,000! Quite impressive, this hysteria,and typically Scottish,or at least so it would appear,since this particular brand of hysteria is an ingre­dient one finds in every single Scottish tape!

The first:
When by the end of Memory of a Free Festival Bowie sings “Sun machine is coming down and we’re gonna have a party” ,he adds “Ah,let me hear you”,and immediately the audience respond and sing it out en masse! Every once in a while Bowie stops singing,so one can hear the audience loud and clear.
“We’ll see you in about ten minutes ,we love you” Bowie calls out after Space Oddity ,and when he returns he has put on yet another of the many new costumes Kansai had designed for him. “Get those lights on” he says after Width of a Circle,and looks at the audience. “Hello Glasgow! Haha! There is one word for an audience like you,and haha,it’s an Americanism and it’s called HOT SHIT!”. A wave of hysterical screaming surges through the Apollo. “You really are! This is called Let’s Spend the Night Together“.
After Suffragette City Bowie calls out “Thank you Clasgow! Bye bye,thank you!” and leaves the stage; the audience reply by a powerful screaming of “We wanL more,we want more,we want Bowie,we want Bowie.!”. Cracked Actor and Rock & Roll Suicide are played as extra’s,but then it is really over. “We love you Glasgow,thank you ,we love you” Bowie cries out,the hall emp­ties and the way is cleared for the audience of the second

I can’t remember if it was before that marvelous rendition of ‘All The Young Dudes‘ coupled with a snatch of ‘Oh You Pretty Things’ or after, but he eventually burst into the spotlight dressed to kill in silver lame bathing top, compete with heavily fringed sleeves. Did I say fringe? I’m afraid I did, and I must say that I was a trifle perturbed by this choice of style – unpleasantly reminiscent of Woodstock Nation fashions – particularly coming from such a self-appointed trend-bender as our David.

This little process took a good 40 minutes to perform and yes, all the previous culprits moved back to their former locations once the lights dimmed and the Chosen One had leapt back into the spotlight for ‘Jean Genie’. Terrible harp playing on Bowie’s part, and he will insist on lurching around the stage: possibly to no good effect. He still looked pretty of course, though on Time, possibly the most pretentious song he’s ever written, his performance reached a new level of low camp. “Time is waiting in the wings” and he peers around the amplifiers to prove the point (Ah, what a charismatic presence!) But who needs to move like Mick Jagger when you’ve got all those costumes to strut around in? Right now, he’s wearing a very interesting body stocking, accommodating half his body, and for the next number “The Width of A Circle”, the Spiders big-power trio epic featuring genuinely excellent Ronson guitar), he’ll prance in a leotard.

Dressing up is so much fun that Bowie winds up doing a quick change for every number towards the end. Well, it makes up for the inescapable fact that our hero’s voice is cracking up. He’s not catching up on his cues either, and the bands getting sluggish. After a very painful rendition of “Aladdin Sane“, Mr B embarks on another medley – “Quicksand” and “Changes” goes into one of those two all-join-in affairs of the evening on the horrendously wimpish chorus of Memory of a Free Festival, “The Sun Machine is coming out and we’re going to have a party. Oh yeah”. Inspired stuff, this, and more pseudo-Woodstock dribblings methinks.