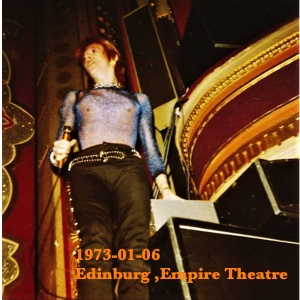 This is one of the worst sounding tapes I worked on and also the result is far from good. At least you can identify the instruments and Bowie’s voice after the treatment and on the other hand you have a lot of hiss. Everyone can listen to the samples I upped and so decide if a download would be worth.

It’s the 2nd show from 73 and it took in a very pompous theatre what can be seen on the attached photos. The show itself is quite average but still nice.

Same as London,but Bowie puts Life on Mars after width of a Circle. This time,during Let’s Spend the Night together.
Bowie’s act runs: “When I saw you walking down the street, I said what’s your name and she said what’s your name. I was just walking down the street. What’s your game,have you got a name? What are you? Oh yeah,well I’m a capricorn. I dropped my handkerchied on the ground,I’ve been here rather ages. I said are you still at school? Yeah? I said do you believe in educa­tion? You do believe in education. will you educate me? “. This part of the show is more than appreciated by the audience! When Bowie reappears to give an extra he says: “This is our first time in Edinburgh,thank you very much,we’ll be back soon!”..