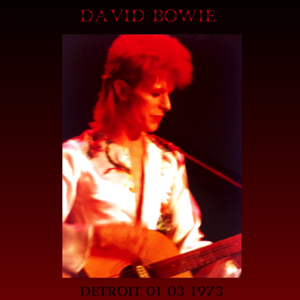 This is a very interesting show, not only because the sound is really great. There are some nice versions of Space Oddity, Five Years and especially Jean Genie which is played differently to other shows.

A fine concert,but very short,with Bowie introducing the new numbers.
In his book Fletcher writes that before Panic in Detroit Bowie says “This one is particulary pertinent to this city,it’s called Panic in Detroit”,which is incorrect. He just says “This one’s called Panic in Detroit“. Aladdin Sane is introduced with the words “This is the title track from the album,it’s called Aladdin Sane“. “Thank you Detroit!” Bowie calls out to the enthusiastic audience after Rock & Roll Sui­cide. A fine tape – and it is in stereo.

==============================
Remaster Info:
flac files -> Magix Music Cleaning Lab (remaster/re-edit) -> FLAC (44,1 kHz, 16 Bit, Stereo) -> bowiestation
Vg+ after some EQ was done. The intro is only partial and cut in the middle. Time is cut after approx. 30 sec. There are probably some other songs missing after Time and before Suffragette City.
I have added some audience noise (encore call) after Suffragette City from another version of the recording (raw stereo master). This version also from an unknown download.
Sound level adjusted. Some hiss reduction. But overall there is still quite some hiss which I decided to leave on in order not to remove to much treble.