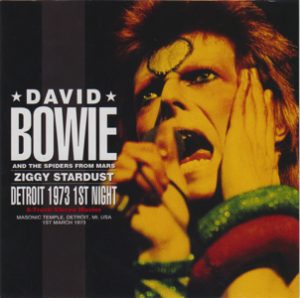 First released on ‘American Daydream’ (SWITCH ON! DEVIL KWSK 2001-12-01 S.O. 2001-12-1), the Detroit recording from the first night of two at the Masonic Temple could easily be held as a staple of mid-career Ziggy Stardust – Shortly before the release of the ‘Aladdin Sane’ album in the US, this was Bowie’s turn to get weirder, the suggestion that the record could be known as “Ziggy In America” The album in question relying a little more on the smooth sweep of musicianship by Mike Garson – One of the longest serving members of Bowie’s band though never specifically known as a Spider which may be why David found him easier to hold on to as he dropped the rest and the disgusting drama of the avant-garde sound that was beginning to melt through the gaps in the bands rock. 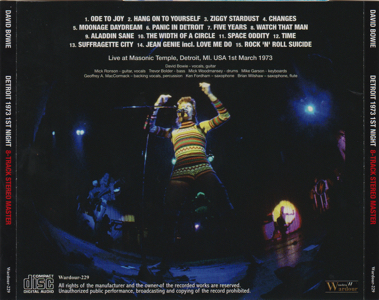 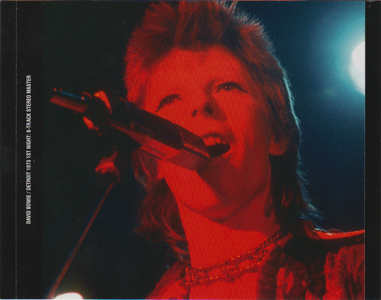 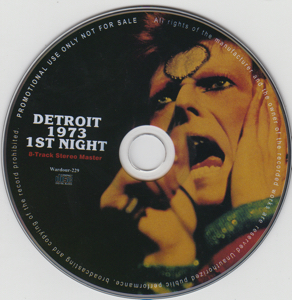 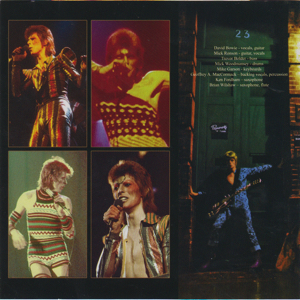 Side by side of ‘American Daydream’, this tape is tougher sounding, bassier with a deeper bottom end. It’s also longer by around a minute – there’s no reason to believe it has slowed against the Japanese release, it may just be an alternate transfer. It also features cuts between sources – For instance, as ‘The Width Of A Circle’ begin’s it’s instrumental intro, it starts muffled, clicks to much brighter, then shifts back to it’s muddied sound. Whether this IS due to two sources being used or is just a consequence of the tape’s wear, I’m open to suggestion.

This isn’t bad for an early audience recording ( From 8 track – Maybe but who was lugging that thing around?) It suffers with a lot of wobble and crunch at various moments throughout the tape – like it has been played a few times through the years but was only realised as an exclusivity after Bowie’s death. There is also a bit of audience chatter around the taper, mostly it’s distant whoops and cheers, sometimes it’s a proxy Lester Bangs with his own high fluting opinions. He finds his form towards the end of the recording where as you find yourself either smiling knowingly at the culpability of youth or wanting to to punch through time, grab this all knowing motortwonk by his glittery scarf and throw him over the crowd. The only cut to this tape is shortly after the first chorus of the song “Time” is abbreviated just after the line ‘Time falls wanking to the floor’.

The set itself is diamond tough. Very hard to find fault with this amount of songwriting and musicianship and, like my review for ‘Cleveland 1972, First Night’, we were capturing stars as they fell, newly written gems that were springing up with force – Either Bowie was getting them out of his system while he was interested or inspired by the flourish of his incarnation, he was going for gold.

I’d certainly recommend this recording, less than pin sharp but rather like Neil Young around the same time, there are very few songs that you find yourself thinking that you’d rather skip over to get to the next, every single one requires through listening.

In a Rolling Stone interview with William S. Burroughs i 2001, David Bowie expanded on the Ziggy Stardust story:

“The time is five years to go before the end of the earth. It has been announced that the world will end because of lack of natural resources. Ziggy is in a position where all the kids have access to things that they thought they wanted. The older people have lost all touch with reality and the kids are left on their own to plunder anything. Ziggy was in a rock-and-roll band and the kids no longer want rock-and-roll. There’s no electricity to play it. Ziggy’s adviser tells him to collect news and sing it, ’cause there is no news. So Ziggy does this and there is terrible news. ‘All the young dudes’ is a song about this news. It’s no hymn to the youth as people thought. It is completely the opposite. […]
The end comes when the infinites arrive. They really are a black hole, but I’ve made them people because it would be very hard to explain a black hole on stage. […]
Ziggy is advised in a dream by the infinites to write the coming of a Starman, so he writes ‘Starman’, which is the first news of hope that the people have heard. So they latch onto it immediately…The starmen that he is talking about are called the infinites, and they are black-hole jumpers. Ziggy has been talking about this amazing spaceman who will be coming down to save the earth. They arrive somewhere in Greenwich Village. They don’t have a care in the world and are of no possible use to us. They just happened to stumble into our universe by black hole jumping. Their whole life is travelling from universe to universe. In the stage show, one of them resembles Brando, another one is a Black New Yorker. I even have one called Queenie, the Infinite Fox…Now Ziggy starts to believe in all this himself and thinks himself a prophet of the future starmen. He takes himself up to the incredible spiritual heights and is kept alive by his disciples. When the infinites arrive, they take bits of Ziggy to make them real because in their original state they are anti-matter and cannot exist in our world. And they tear him to pieces on stage during the song ‘Rock ‘n’ roll suicide’. As soon as Ziggy dies on stage the infinites take his elements and make themselves visible.”