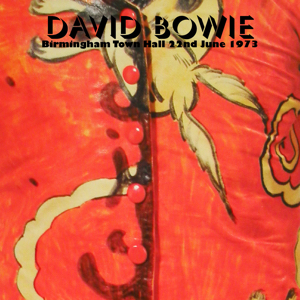 Bowie was one of the many legendary musicians to have performed at Birmingham’s iconic Town Hall which has also hosted the likes of Led Zeppelin, Buddy Holly, Roy Orbison (supported by The Beatles) and Black Sabbath.

This tape seems to be very rare as it never appeared on any torrent tracker (as far as I could find out). The recording itself is by no means
complete as it is composed of the 2 shows of that day and from both shows quite some portions are missing.
what in my opinion makes this recording great is the atmosphere of the set, especially during more quiet passages. You can almost materialize how the fans are reaching out
their arms to touch David. Amongst others there are great versions of Time, Jean Genie/Love Me Do and especially Let’s Spend The Night Together with a big portion
of Mike Garson’s piano (who “is not really a Spider” according to David’s band introduction). And what a nice transition from Wild Eyed Boy.. to All The Young Dudes.
Attached you find not only the cover from the original recording but also some other items I found in the web like a copy of the ticket stub, a very blurred photo of one of
the shows and the poster.
The recording is supposed for 2 cd’s While as it is below 80 min. it fits on one cd. So it’s up to you what you make out of it.
I hope you will enjoy this tape as much as I do.