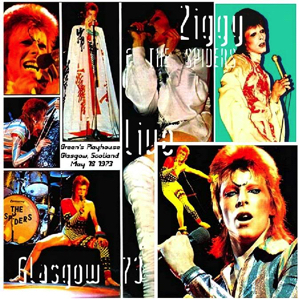 The first:
The audience are cumpletely out of their minds ,and although they are no more than 3,500,they sound like some 10,000! Quite impressive, this hysteria,and typically Scottish,or at least so it would appear,since this particular brand of hysteria is an ingre­dient one finds in every single Scottish tape! When by the end of Memory of a Free Festival Bowie sings “Sun machine is coming down and we’re gonna have a party” ,he adds “Ah,let me hear you”,and immediately the audience respond and sing it out en masse! Every once in a while Bowie stops singing,so one can hear the audience loud and clear.
“We’ll see you in about ten minutes ,we love you” Bowie calls out after Space Oddity ,and when he returns he has put on yet another of the many new costumes Kansai had designed for him. “Get those lights on” he says after Width of a Circle,and looks at the audience. “Hello Glasgow! Haha! There is one word for an audience like you,and haha,it’s an Americanism and it’s called HOT SHIT!”. A wave of hysterical screaming surges through the Apollo. “You really are! This is called Let’s Spend the Night Together“.
After Suffragette City Bowie calls out “Thank you Clasgow! Bye bye,thank you!” and leaves the stage; the audience reply by a powerful screaming of “We wanL more,we want more,we want Bowie,we want Bowie.!”. Cracked Actor and Rock & Roll Suicide are played as extra’s,but then it is really over. “We love you Glasgow,thank you ,we love you” Bowie cries out,the hall emp­ties and the way is cleared for the audience of the second