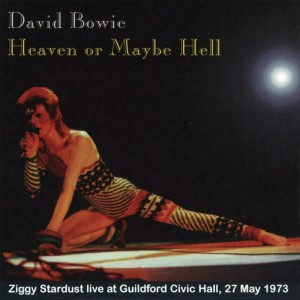 The announces produces a couple of sentences,but I cannot understand all of what he says: “Ladies and gentlemen,David said tonight’s show is gonna be a ….. that you really gonna be enjoying. Be good to that,we’re not ….. right away through the show. Ladies and gentlemen,thank you very much indeed,and in just a few moments – David Bowie!”. Then there is the theme from the movie ‘Clockwork Orange’ ,next the first bars to Beet­hoven’s 9th symphony,which draws some shouts from the audien­ce. Then the Spiders burst out in Hang on to Yourself,and the 1,200 present in this small hall give a loose to their vocal chords. A large chunk is missing from the middle of Ziggy Stardust. A funny incident after Watch That Man: the first bars,the guitar intro to Wild Eyed Boy From Freecloud begins, then stops abrubtly. Bowie sighs “Aaaah”,the intro to Quick­ sand begins – did Bowie prefer to play this to the Wild Eyed Boy medley,and did he give the band a sign? Then the Quicksand intro stops. “We got a problem here” Bowie says,he sighs,can’t decide which medley to play and lets the audience choose: “aah … Wild Eyed Boy,or Quicksand?”. As soon as he has pronounced the latter the audience cheer loudly,so the Quicksand-medley it is. A funny exception,for actually Brighton was the last time that that medley was played.
After Space Oddity there is a short silence and a voice says “Got a little problem,don’t worry,hang on” (one of the Spiders?) ,but soon the problem appears to be solved for Jean Genie begins. After suffragette City Bowie cries out “Thank you, goodnight!” and the audience start shou­ting,clapping and stam­ping their feet for an extra – but then the tape breaks off,it contains no extra’s; probably these were Cracked Actor and Rock & Roll Suicide ,maybe also Drive in Saturday . Anyway,a fine tape,and a very rare one too (at least at the moment of my writing this 16-1-1985 – it still is)!

In the early 1970s, David Bowie brought the Ziggy Stardust tour to the Civic Hall in Guildford.

He also played a solo show at the Stag Hill campus at the University of Surrey in March 14 1970, and in 1969 played in the town when he led Feathers on March 14.

Following the announcement of Bowie’s death, fans have been remembering his appearances in the town.

Nick Osborne, who now lives in Turkey, saw the 1973 Civic Hall show when he was living in Old Woking.

“I’ve always been interested in music, started going to gigs when I was about 13,” Mr Osborne said, who is now 58.

“My older sister was a big Beatles fan, used to go to Guildford Civic a lot.

“In those days there was always a band on, live music was much bigger then than today and ticket prices were not too dear.

“I saw all the big names and up and coming new bands.”

Bowie also appeared in Guildford at a Mott the Hoople show at the Civic Hall in August 1972.

He wrote and produced one of the band’s most famous songs, All The Young Dudes, and came on to sing the tune with them.

“They did All the Young Dudes which was a bit of an anthem then,” Mr Osborne said.

“Bowie was then not that much of a big name, but I can say you knew that he was going to be huge, but I never expected him to go on for so many years.

“It is an end of an era. “I’m 58 now and just wish i could see some of the great bands again before they are all playing that great gig in the sky.”

Colin Balchin who lives in Farnham also remembers Bowie’s appearance at the Mott the Hoople show when he was 16-years-old.

“It was just after that song All The Young Dudes was released, and he wrote that song,” Mr Balchin said.

“We didn’t expect anything, and he walked on the stage and sang with them.

“I was quite surprised, but then he wasn’t very big at that time.

“He was pretty well known. We knew who he was. It was one of those little surprises I tell a lot of people ‘I saw that bloke at Guildford Civic Hall.’”

The set list according to the description of a bootleg copy of the 1973 Ziggy Stardust Civic Hall show in Guildford was: