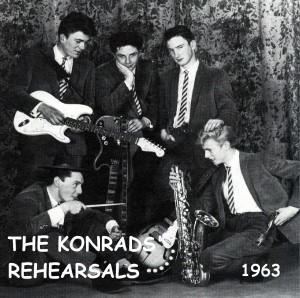 Baby It’s Too Late Now: released as a single (CBS 201812) by Bowie’s former group The Konrads in 1965, backed by ‘I’m Over You’. A second single (Decca 32060), ‘I Didn’t Know How Much’ b/w ‘I Thought Of You Last Night’, was released in Canada in the same year. In 2003, much to everyone’s surprise a Konrads rehearsal tape was said to have found its way into the collector’s circuit. Not long after, the bootleg Ziggy Final Farewell 1973 (Rattle Snake RS 313/32) appeared, containing seven songs supposedly recorded in 1963. According to the liner notes, these tracks were “The Konrads rehearsals, Bromley Scout Hut, South London, July-August 1963.” The following titles are given to the seven tracks: The Better I Know/Now I’m On My Way/Baby It’s Too Late/I’m Over You/Judgement Day/I Don’t Know How Much/I Thought Of You Last Night. With the inclusion of four songs that were

Early 1962 – June 1962
The West Kent group The Kon-rads were formed in Early 1962 by drummer Dave Crook (b. David Crook) and guitarist Neville Wills (b. Shirley, Kent, UK d. 1981). Just after Easter singer George Underwood (b. Richard George Underwood, 28 January 1947, Bromley, Kent, UK) (ex George and the Dragons, The Hillsiders, The Spitfires) joined the band. Once he was in, he brought along his best friend and sax player David Jones (the future David Bowie) (b. David Robert Hayward Jones, 6 January 1947, 40 Stansfield Road, Brixton, South West London, UK), who joined in June 1962. He had a metal tenor saxophone.
So The Kon-rads consisted of, David Jones on lead vocals, tenor saxophone, Neville Wills on lead guitar, Dave Crook on drums, and George Underwood on lead vocals. Apparently the name The Kon-rads came about whilst they were appearing with popular early 60’s singer Jess Conrad (b. Gerald Arthur James, February 24, 1936, Brixton, South West London, UK), who introduced them as ‘My Conrads.’ The hyphen was removed at Jones’ insistence.

June 1962 – Late 1962
David and the Konrads performed a few ‘Shadows’ numbers during the schools PTA fete. In the Friday June 22nd 1962 edition of The Kentish Times, there was a headline ‘Nearly 4,000 at school fete’ – which stated: ‘In a continental style cage where one could sip soft drinks, while a group of young instrumentalists called ‘The Conrads’, played music on guitars, saxophone and drums.’ In June 1962 the band had rehearsals at The Church Hall in Bromley Common, Bromley, Kent. Many rehearsals were held at The Church Hall. Fans of the band were charged two shillings to watch the performances. The vast majority of The Konrads performances were held at small local venues consisting of youth clubs, dances, church halls and Bar Mitzvah parties. 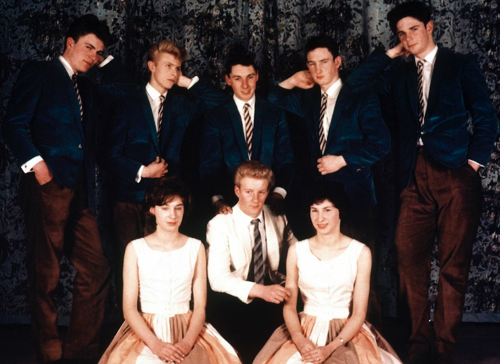 Late 1962 – January 1964
In Late 1962 Dave Hadfield (b. David Hadfield, 1941, Lancashire, UK) replaced Dave Crook on drums. Hadfield had spent his childhood in South Africa and had returned as a teenager to Cheshunt, Herfordshire, where he attended Cheshunt High School. Among his contemporaries was a guitarist named Harry Webb, better known as singer Cliff Richard (b. Harry Roder Webb, October 14, 1940, The King George Hospital, Victoria Street, Lucknow, Uttar Pradesh State, India). He did a few gigs with Harry Webb. At 16 Hadfield joined the Merchant Navy and become a Fourth Officer on a passanger liner. He retired in Late 1962 and moved to Bromley, Kent to live with his grandmother.
Hadfield placed an advert on the noticeboard of Vic Furlong’s record shop in Bromley, Surrey, near to Bromley South Station. Furlong supplied a noticeboard where groups looking for members and members looking for groups could offer their services. Hadfield stated in his advertisment that ‘ex Cliff Richard drummer’ looking for work. With Hadfield joining he became leader of the group. He was several years older than the rest of the band and six years older than David Jones. Hadfield had spent £90 of his £100 savings on a drum kit. The Konrads guitarist Neville Wills, phoned the number given on the advert, which was Hadfield’s grandmother’s phone number. Wills told Hadfield he belonged to a ‘little group’ called The Konrads and that they was looking for a drummer. Not long afterwards Hadfield met the rest of the band, Alan Doods, George Underwood and David Jones.
Also joining the band at this time were Rocky Shahan on bass guitar (b. Rocky Chaudhari), Roger Ferris, and sisters Christine and Stella Patton (now Gall) all on lead vocals. David Jones changed his surname to ‘Dave Jay’ because he was inspired by Peter Jay And The Jaywalkers, who according to Jones were only one of two British bands that ‘knew anything about saxophones’. The band was also joined by rhythm guitarist Alan Dodds. He went for rehearsals at Wills house and agreed that Hadfield was in. The new drummer did not like George Underwood and got a friend of his to warn Underwood. In the end he was booted out of the band, but he still lent the band his amp.
From Late 1962 to Earl 1963 The Konrads rehearsed intensively at St Mary’s Church Hall in Bromley, Kent, until they were hounded out after complaints about the noise and forced to move down the road to a damp prefab building. Soon the band played most weekends in small pubs and halls around South East London and Kent, including Bromley, Beckenham, Orpington, all in Kent and Blackheath, South East London.
A list containing 58 song titles were drawn up by Hadfield, which included ‘In The Mood’, ‘China Doll’, ‘The Young Ones’ and ‘Sweet Little Sixteen’. Jones wrote many compositions aided by guitarist Neville Wills, who used to help him compose the music. On May 18, 1963 the band played at The Hillsiders Youth Club, Lebanon Gardens, Biggin Hill, Surrey. At this gig Jones sings Joe Brown’s ‘A Picture Of You’ and Bruce Chanel’s ‘Hey Baby’. George Underwood took the vocals on ‘It’s Only Make Believe’ and ‘A Night At Daddy Gees’. Mrs Orme set up The Hillsiders Youth Club which met every Friday in the W.I. Hall in Lebanon Gardens. It got a lot of support from the local youth and also from those of Westerham.
On Friday, August 30, 1963 The Konrads entered the Decca Studios at Broadhurst Gardens in West Hampstead, North West London, for the first time and cut their only recorded record, which was entitled ‘I Never Dreamed’. The song was written by David Jones, Roger Ferris and Alan Dodds, the main vocals were by Roger Ferris, with Jones taking the harmonies. Several acetates were cut by Decca. Drummer David Hadfield said the song concerned an ‘air crash’. Soon after this recording, Jones left the band, though the band stayed together playing the club circuit and even toured as the opening act for The Rolling Stones. Jones said he became dissatisfied with The Konrads because of their choice of song repertoire. He wanted to play more blues numbers instead of the pop standards they chose to cover.
The Konrads carried on after Jones left.