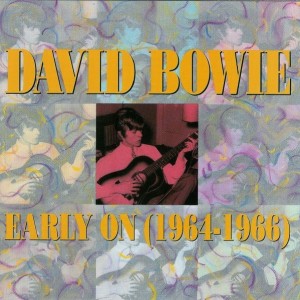 Early On (1964–1966) is a compilation album by David Bowie, released in 1991. It is notable because of it being the first and only attempt to compile a comprehensive collection of all of Bowie’s pre-Deram material and encompasses multiple labels including Vocallion, Parlophone, and Pye. Tracks three and four are alternate versions to the official singles, while “Do Anything You Say” is also a different mix to the normal single. There are also five unreleased songs included that came from Shel Talmy’s collection. Talmy produced Bowie’s second and third single. A cassette version was released, however this omitted “Lize Jane”, “Louie, Louie Go Home”, and “Good Morning Girl”.

Before landing his first commercial success with 1969’s “Space Oddity,” David Bowie released a number of flop records in a variety of styles. He first emerged in the mid-1960s as a mod following the paths of The Who, Kinks, and Rolling Stones. The 17-cut CD Early On (1964-66) is by far the most comprehensive anthology of his first works, gathering all six of his first singles and adding five previously unreleased demos from 1965. Fans of Bowie’s famous work may be nonplussed by this material, in which the singer shifts from sub-Stones R&B to Who/Kinkish power chords to trendy Swinging London pop in search of his own style. He didn’t establish his own identity on these fairly derivative recordings, but that’s not to say they aren’t without their enjoyable aspects. The 1965 single “You’ve Got A Habit Of Leaving” has some fierce Who-styled feedback, “Can’t Help Thinking About Me” is an uneasily introspective number that foreshadows his later lyrics, and the acoustic demos find him groping closer toward a more familiar and distinctive vocal style. Several of the tunes on this collection were produced by the legendary Shel Talmy, who also handled sessions for The Who and Kinks in the mid-’60s.