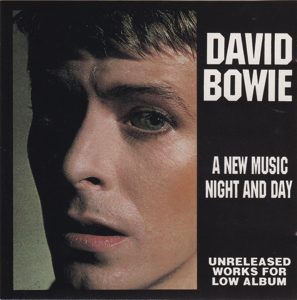 The sessions for Low had seen Bowie, Eno and Visconti join forces with what is unarguably Bowie’s finest rhythm section: Carlos Alomar on rhythm guitar, George Murray on bass and Dennis Davis on drums. The incredible find of Ricky Gardiner on lead guitar completed the line-up. The result was one of the most influential British records of all time. A host of electronic pioneers would later make music in the image of Low.

After years of trained musicians playing expensive synths with maximum virtuosity, Low acknowledged the fact that synths could be used in short pop songs as well as lengthy electronic instrumentals. A generation of new wave bands added the synth to their kit and, by the end of the decade, electronic music was a constituent part of the mainstream chart sound.

The results of the Low sessions mortified Bowie’s label, RCA. Originally titled New Music, Night And Day, the album was scheduled for release in late autumn 1976. Its title perfectly captured the sense of adventure to be found in the proto-electronica of the age, and pre-dated Sounds magazine’s christening of the movement by a whole year. But it was the first (and by no means the last) of Bowie’s records to fall foul of scheduling conflicts. One RCA executive allegedly approached Bowie and told him that the label would pay for him to return to Los Angeles and make another album of Young Americans-style pop. Meanwhile, Bowie’s ex-manager Tony Defries reportedly came to hear the record prior to its release and tried to intervene, fearing that his own future royalty payments were under threat, so uncompromising was the music.