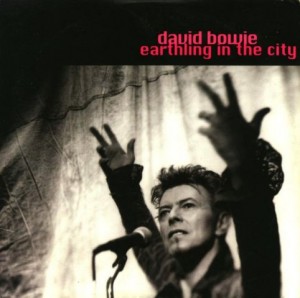 Earthling in the City is a 6-track promotional CD by David Bowie that was distributed by GQ magazine with their November 1997 issue.
The disc is largely made up of live performances and remixes of songs drawn from Bowie’s albums Black Tie White Noise, Outside, and Earthling 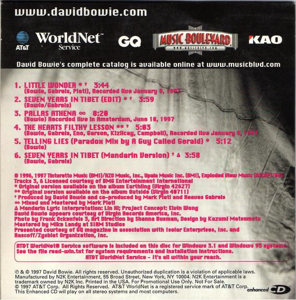 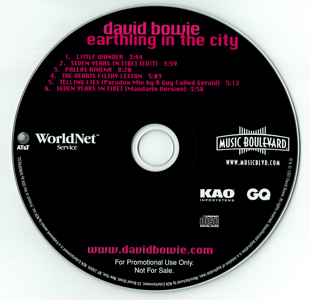 Review 01
Given away free with the November 1997 issue of GQ, this Bowie sampler plugs his Earthling album and some Internet service, but offers some rarities that make it worth searching out (good luck), primarily live versions of “Little Wonder,” “Heart’s Filthy Lesson” from Bowie’s 50th birthday concert at Madison Square Garden, and a live “Pallas Athena” that previously was only available on vinyl under the alias Tao Jones Index.

Review 02
Little Wonder sounds as great live as it does in the studio. We could have all lived without the remix of “Telling Lies” and the mandarin version of “Seven Years in Tibet”. The remaining tracks are above average and considering this release was given away free originally then you can’t complain too much.

Review 03
A throwaway promo from Mr. David Bowie Version 19.97.00. I could care less about the worthless techno/ambient crap from a guy called gerald, but the live tracks are interesting if only because they let you see how the overproduced mid-90s material fared on stage. Like novelty soda pop, they go down fairly well. Oh, and as always, hearing Bowie sing in another language is a hoot. I wonder how badly he mangled the Mandarin…

Review 04
For a brief period, around the releases of Outside and Earthling, I was really into David Bowie. This is probably still my favourite Bowie era, and Earthling in the City (which I had to buy a GQ magazine to obtain a copy of) is a decent addition to mid-to-late 90s Bowie.

Review 05
This is a funky enough little six-song promo disc which accompanied the November 1997 edition of GQ men’s fashion magazine. It features a couple of live mementos from his spectacular 50th birthday concert (“Little Wonder” and “Heart’s Filthy Lesson”) and a sprinkling of edits and remixes, including a version of “Seven Years In Tibet” sung in Mandarin.

A quirky and fun little bauble of a disc, though more than most artists are willing to part with as a magazine freebie e.p.

Review 06
Hella cool promo disc. Thanks to Kevin for making sure I got one when I was an earthling in the jungle.