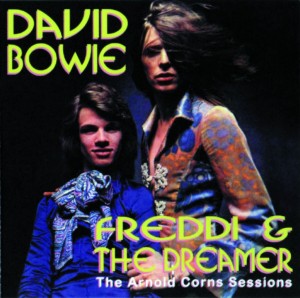 A very nice disc with songs recorded during the short Arnold Corns era in 1971.
The things that are “new” on this CD are three new versions of LOOKING FOR A FRIEND, one of MOONAGE DAYDREAM and one of HANG ON TO YOURSELF (with Gene Vincent!). The rest of the songs have been released on other discs. The sound quality is excellent, except for the Gene Vincent track. That track is only good! Some funny liner notes, and some really good information about the Arnold Corns project! A true must! 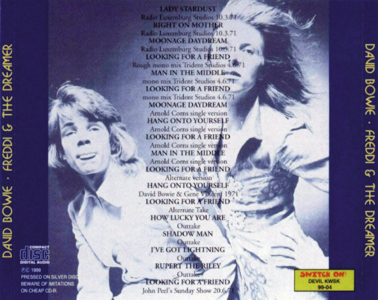 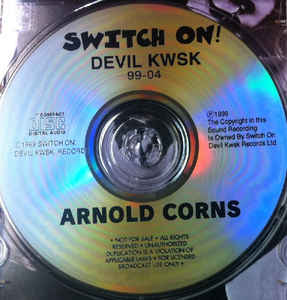 Arnold Corns had a strange hobby, Collecting clothes…
I’m sure you’re all more than familiar with the embryonic versions of Moonage Daydream and Hang On To Yourself released on the B&C label by The Arnold Corns in the UK in May 1971. 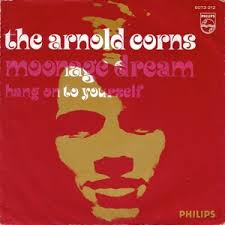 If you were in Holland at the time, you may even have stumbled upon ‘Moonage Dream’ (pic) on ‘Philips’, in the only picture sleeve issued for the single. (see here)

The project was supposedly created as a vehicle for David’s new friend and future creator of many of the more memorable Bowie outfits over the next few years, Freddie Burretti, aka Rudi Valentino for this project. But, it was really a way of David recording new material anonymously to avoid record company complications.
Backed by Mark Carr-Pritchard on guitar, Peter De Somogyl on bass and Tim Broadbent on drums, (all members of Rungk) the lead vocal is clearly David with no evidence of Freddie on the recordings at all. There is another voice joining David on the chorus, which I suppose is most likely to be Carr-Pritchard, but I could be wrong.
The publicity material for this first single from The Arnold Corns utilised a Brian Ward shot that featured on the front of a ‘sex education’ magazine called Curious. Even the Dutch picture cover was lifted from this same shot which appears in colour above.
Thankfully, the record didn’t race to the top of the singles chart, otherwise, (following the success of Peter Noone’s version of Oh! You Pretty Things) Bowie may have become convinced that his future lay in songwriting for others rather than performing his songs under his own name.
The version of ‘Moonage Daydream’ recorded later in the year for the album ‘Ziggy Stardust‘ is far superior and a more vital recording than the plodding Arnold Corns version, likewise ‘Hang On To Yourself’.
Shortening the name to Arnold Corns didn’t prove any more successful for the next single, released in August 1972, for which Hang On To Yourself was elevated to A-side status. This 45 was seen as an attempt by B&C to cash-in on the success of Ziggy Stardust.
A previously unreleased song, ‘Man In The Middle’, featuring Mark Carr-Pritchard on lead vocals backed by The Spiders became the B-side…but that release isn’t forty until next year, so more of that story then.
See the Arnold Corns section on Lanky Pearson’s Visual Discography of David Bowie 7″ vinyl for label variations and general nerdy excitement.