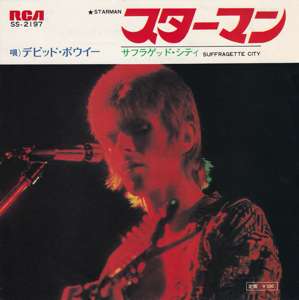 Issued with a picture insert in an RCA Japan company sleeve with liner notes in Japanese and English lyrics to both tracks on the reverse.

Note there are several distinct pressings of this single which stayed in print longer than most; the pictured edition, circa 1976 or later, is the most common, the variation pressed by RVC Corporation. The first pressing had a “propeller” centre and was manufactured by Victor Company of Japan, Yokohama. A second variation from the same company had a large centre hole (white label promos exist for both too). The third variation was manufactured by Victor Musical Industries, Tokyo. The RVC pressings came last and stayed in print into the ’80s hence their being relatively common and easy to find. The early pressings command higher prices.