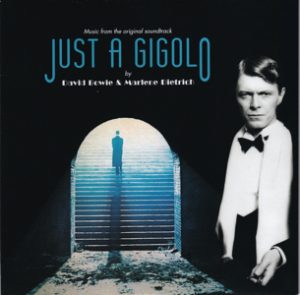 A1. Revolutionary Song
B1. Just A Gigolo

Credited to The Rebels, ‘The Revolutionary Song’ was David Bowie’s only musical contribution to the 1978 film Just A Gigolo.

Directed by David Hemmings, the film starred Bowie, Sydne Rome, Kim Novak, and Marlene Dietrich in her final film role. Bowie played Prussian officer Paul Ambrosius von Przygodski, who returns to Germany after the Great War and finds work as a gigolo in a Berlin brothel.

Bowie’s first acting role after The Man Who Fell To Earth, Just A Gigolo was a critical and commercial failure. Its shortcomings were readily acknowledged by Bowie.

Yeah, the film was a cack (laughs loudly), a real cack. Everybody who was involved in that film—when they meet each other now, they look away (covers face with hands, laughs).
Yes, it was one of those. Oh well, we’ve all got to do one and hopefully I’ve done mine now. I think the great failure on my part for becoming involved in that particular venture was my acceptance of the director as a person rather than actually bothering to consider what the script consisted of – or rather didn’t consist of, since it contained absolutely nothing – and also what experience the guy had had as a director.

I love Hemmings. He’s a terrific fella, and I fell for that. He’s wonderful and a great talker (laughs). Listen – you were disappointed, and you weren’t even in it. Imagine how we felt. Really, it was such a shame. I can only say that David and I are still great friends and we know what we did. We’ll never work together again. Friendship was saved, if nothing else.

Fortunately it’s been so long now that I don’t feel so uptight when I talk about it, but the first year or so after I’d made the thing I was furious, mainly with myself. I mean, oh God, I really should have known better. Every real, legitimate actor that I’ve ever met has told me never to even approach a film unless you know the script is good. If the script isn’t any good, then there’s no way a film is going to be good.