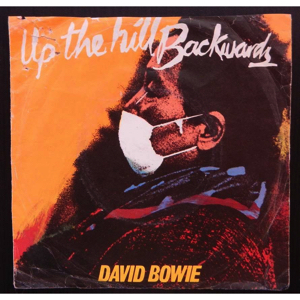 “Up the Hill Backwards” is a song from the 1980 album Scary Monsters (And Super Creeps). It was also issued as the fourth and final single from the album in March 1981. This was due to be the last David Bowie single on RCA and to commemorate this fact RCA in the UK pressed some of the records with the old style orange RCA label instead of the normal black label.

The lyric is often seen as a commentary on the public coverage of his divorce from Angela Bowie, one of several tracks on the album that muse over the double-edged sword of celebrity. It has also been interpreted as facing up to crisis in general. Like the previous single, “Scary Monsters”, the track featured co-producer Tony Visconti on acoustic guitar.

The B-side was “Crystal Japan”, an instrumental recorded in 1980 for a Japanese commercial for the sake Crystal Jun Rock, which also featured an appearance from Bowie. “Teenage Wildlife” was originally slated as the B-side for “Up the Hill Backwards” until Bowie found out the prices fans were paying for the import single of “Crystal Japan”, and insisted the track receive a UK release.

The uncommercial nature of “Up the Hill Backwards”, combined with the track having been available on the album for the past six months, saw the single stall at No. 32 in the UK chart. It also briefly charted at No. 49 in Canada. In the US, RCA only released a 12-inch single which was distributed with a set of 36 stamps, designed by David Bowie himself. The stamps are photographs of Bowie in his Pierrot costume (as seen on the cover), colored crayon-like, in a variety of poses, these stamps came with early pressings of “Ashes To Ashes” in the UK.

Live versions
The song was featured on the Glass Spider tour and appears in the filmed concert and CD release. It was usually the first song performed, with Carlos Alomar playing a solo and being repeatedly told to “shut up.” The dance troupe then engaged in a short conversation ending with the words “wrong stuff” being chanted. Bowie would then emerge from the top of the towering set and commence the spoken interlude introducing the song “Glass Spider”.

Other releases
It was the B-side of the French release of the single “Scary Monsters (And Super Creeps)” in January 1981.
The Sound + Vision box set featured the song.
It was included on The Best of David Bowie 1980/1987.