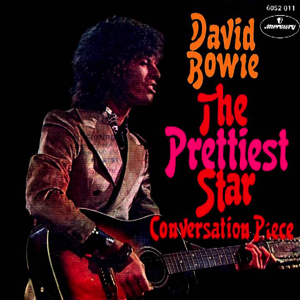 “The Prettiest Star” was released as a single in March 1970.

In January 1970, Bowie re-recorded an old Deram track, “London Bye Ta Ta”, intended as a follow-up single to “Space Oddity”. However, the same sessions spawned a new composition named “The Prettiest Star”, which Bowie had written for Angela Barnett, reputedly playing it down the telephone as part of his proposal to her. It’s in Greek “hassapiko” dance style, as a tribute to Angie’s Cypriot ethnic origin. He also chose it as his next single, to the displeasure of manager Kenneth Pitt, who favoured “London Bye Ta Ta”.

The track featured Marc Bolan on guitar, with whom Bowie would spend the next few years as a rival for the crown of the king of glam rock. Producer Tony Visconti, who brought the two aspiring pop stars together in the studio, recalled that the session went well until the end when Bolan’s wife June remarked to Bowie, “Marc is too good for you, to be playing on this record!”

Despite receiving good notices, the single reportedly sold fewer than 800 copies, a major disappointment on the back of the success of “Space Oddity”. A more glam-influenced version, recorded in New York in December 1972, was included on the album Aladdin Sane, with Mick Ronson recreating Bolan’s original guitar part almost note-for-note.

Other releases
The Aladdin Sane version was released as the B-side of the US single “Time” in April 1973.

The Aladdin Sane version also appeared on the Japanese compilation The Best of David Bowie in 1974.

The song appeared on the musical soundtrack of the film Kinky Boots.