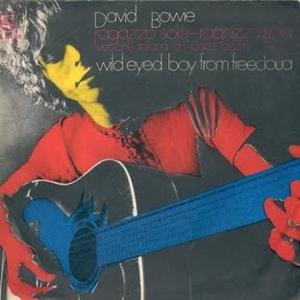 This special version of “Space Oddity” was commissioned for the Italian market and released in early 1970. Two Italian bands, Equipe 84 and The Computers, had recorded their own Italian versions of “Space Oddity” and Bowie’s record company probably felt that this threatened the chances of Bowie’s version in Italy. Instead of translating the lyrics of the original version Mogol wrote a love story about a young couple that meet on the top of a mountain, “Ragazzo solo, ragazza sola” meaning “Lonely Boy, Lonely Girl”. Bowie recorded the Italian vocal on 20 December 1969.

This version was later released on the album Rare.