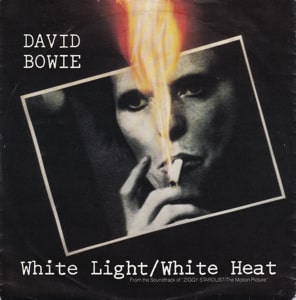 The song was regularly performed live by David Bowie. A version he recorded in 1973 was released as a single in 1983 to promote the album Ziggy Stardust: The Motion Picture.

Bowie, a long-time Velvets fan, had been performing “White Light/White Heat” since 1971. (His album of that year, Hunky Dory, features a credit to the song for having inspired Bowie’s “Queen Bitch”). It had featured throughout the Ziggy Stardust Tour (including a performance with Lou Reed on July 8, 1972), been recorded by Bowie for two BBC sessions, and been slated for inclusion on Pin Ups (the backing track from this session was later recorded as a solo version by Mick Ronson in 1975). Despite this, the Ziggy Stardust – The Motion Picture project would be the first time the song had been issued on a Bowie record, and as such it was released as a single.

side B. Cracked Actor
Written-By – Bowie*

From the soundtrack of “Ziggy Stardust / The Motion Picture”