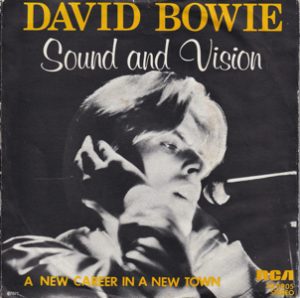 “Sound and Vision” is a song by English singer-songwriter David Bowie which appeared on his 1977 album Low. The song is notable for juxtaposing an uplifting guitar and synthesizer-led instrumental track with Bowie’s withdrawn lyrics. In keeping with the minimalist approach of Low, Bowie and co-producer Tony Visconti originally recorded the track as an instrumental, bar the backing vocal (performed by Visconti’s wife, Mary Hopkin). Bowie then recorded his vocal after the rest of the band had left the studio, before trimming verses off the lyrics and leaving a relatively lengthy instrumental intro on the finished song.

Selected as the first single from the album, “Sound and Vision” was used by the BBC on trailers at the time. This provided considerable exposure, much needed as Bowie opted to do nothing to promote the single himself, and helped the song to No. 3. The song was also a top ten hit in Germany, Austria and the Netherlands. However, it stalled at No. 87 in Canada and only managed No. 69 in the United States, where it signaled the end of Bowie’s short commercial honeymoon until “Let’s Dance” in 1983.

The first live performance of the song was at Earl’s Court during the Isolar II Tour on 1 July 1978. In 1990, it was a regular number for Bowie’s greatest hits Sound+Vision Tour. The name was also used for a Rykodisc boxed set anthology in 1989.