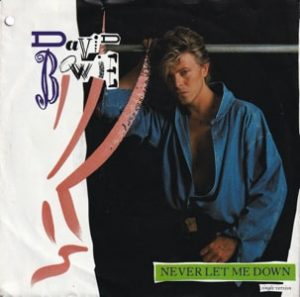 “Never Let Me Down” is a song recorded by English singer David Bowie, serving as the title track for his 1987 studio album of the same name. It was released as the third and final single from the record in 1987, and served as his last solo single until 1992’s “Real Cool World” (although a remix of “Fame” was released in 1990). “Never Let Me Down” was written by the singer himself and Carlos Alomar, while production was handled by Bowie along with David Richards.

Music critics viewed the track as one of the best on Never Let Me Down and listed it among the most underrated of his career. An accompanying music video for the single was shot by French director Jean-Baptiste Mondino and similarly received positive response. Commercially, “Never Let Me Down” reached number 27 on the Billboard Hot 100 and number 34 on the UK Singles Chart. It was aided by a CD release, Bowie’s first, and remained the singer’s last single to chart within the top 40 in the United States until “Lazarus” (2015).