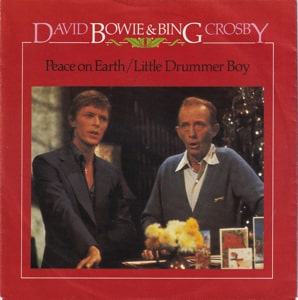 side B. Fantastic Voyage– 2:55
David Bowie

The single saw commercial success upon its release in 1982 and peaked at number 3 on the UK Singles Chart. The single became one of David Bowie’s best selling in his career, with total estimated sales over 400,000 in the UK alone.

The song has since become a Christmas classic in the United States and United Kingdom and has been referred to by the Washington Post as “one of the most successful duets in Christmas music history”.

Recording
The track was recorded on September 11, 1977 for Crosby’s then-upcoming television special, Bing Crosby’s Merrie Olde Christmas. The pair exchanged scripted dialogue about what they each do for their family Christmases, before singing “Little Drummer Boy” with a new counterpoint with original lyrics written for the special, “Peace on Earth”.

Bowie’s appearance has been described as a “surreal” event, undertaken at a time that he was “actively trying to normalise his career”. He later admitted to having only appeared on the show because “I just knew my mother liked him”. Buz Kohan was not sure that Crosby knew who Bowie was, but Ian Fraser claimed, “I’m pretty sure he did. Bing was no idiot. If he didn’t, his kids sure did.”

A few days after the taping, Crosby said of Bowie, “clean-cut kid and a real fine asset to the show. He sings well, has a great voice and reads lines well.”

Crosby died on October 14, nearly five weeks after recording the special at Elstree Studios near London; in the U.S., the show aired just over a month later, on November 30, 1977, on CBS. In the United Kingdom, the special first aired on December 24, 1977 on ITV.

Release and commercial success
The song was available for some years as a bootleg single backed with “Heroes”, which Bowie had also performed on the TV special. In 1982, RCA Records issued the recording as an official single, complete with the dialogue, arbitrarily placing “Fantastic Voyage” from the Lodger album on the B-side. Bowie was unhappy with this move, which further soured his already strained relationship with RCA, and he left the label soon after.

The single debuted on the UK singles chart in November 1982, and climbed to position number three on the chart, boosted by a 12″ picture disc release. The single proved to be one of David Bowie’s fastest selling singles, having sales over 250,000 within its first month and being certified silver by the British Phonographic Industry one month after its release. The single has total estimated sales of 445,424 in the UK, giving Bowie one of his most successful singles. It has since become a perennial on British Christmas compilation albums, with the TV sequence also a regular on UK nostalgia shows.

In the United States and Canada, “Peace on Earth/Little Drummer Boy” became a staple on radio stations during the Christmas season. On November 14, 1995, Oglio Records released a special multimedia CD single of “Peace on Earth/Little Drummer Boy” which contained both standard full-length audio version and the full-length music video of the footage from the 1977 Christmas special accessible via CD-ROM drives.

On November 9, 2010, Collector’s Choice Music released a 7-inch vinyl edition of “Peace on Earth/Little Drummer Boy” on red-colored vinyl in the United States. The flip-side of the single contained a Bing Crosby/Ella Fitzgerald duet of the song “White Christmas”, recorded in 1953. The single was limited to 2,000 copies.

The single continues to chart in the Christmas season around North America and Europe. In 1998, the single reached a new peak of 2 on the Canadian Singles Chart.