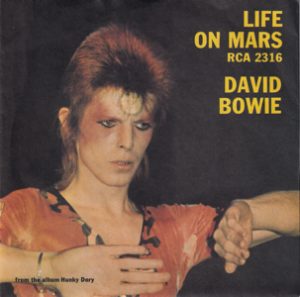 “Life on Mars?” is a song by English singer-songwriter David Bowie. It was first released on his 1971 album Hunky Dory and later released in 1973 as a single. The song has cryptic lyrics by Bowie and prominent piano by Rick Wakeman. As a single, “Life on Mars?” reached number three in the UK Singles Chart and stayed on the chart for thirteen weeks. A music video was filmed by Mick Rock to promote the single release.

Tracklist
side A. Life On Mars? 3:45
Producer – Ken Scott

side B. The Man Who Sold The World 3:40
Producer – Tony Visconti

There is another master for the single Life On Mars? with Drive-In Saturday as B-side.

Side A:
Produced by Ken Scott (assisted by the actor)
A Gem Production
“Life On Mars?”
(taken from the album “Hunky Dory” SF 8244)

Side B:
Produced by Tony Visconti
“The Man Who Sold The World”.
(taken from the album of the same name LSP 4816)