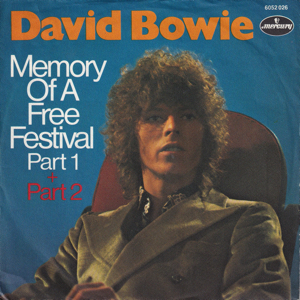 “Memory of a Free Festival” is a 1970 single. The song had originally been recorded in September 1969 as a seven-minute opus for Bowie’s second self-titled album. It was reworked in March–April 1970 at the behest of Mercury Records, the label believing that the track had a better chance of success as a single than “The Prettiest Star”, released earlier in the year. Bowie and Tony Visconti roughly split the track in half, re-recording it so both halves could function as individual songs. A more rock-oriented version than the earlier album cut, this rendition marked guitarist Mick Ronson’s and drummer Mick Woodmansey’s studio debut with Bowie’s band, bringing together the line-up that would shortly record The Man Who Sold the World.

Biographer David Buckley described “Memory of a Free Festival” as “a sort of trippy retake of the Stones’ ‘Sympathy for the Devil’ but with a smiley lyric”. The track was written as a homage to the Free Festival, organised by the Beckenham Arts Lab, which was held at Croydon Road Recreation Ground in Beckenham on 16 August 1969.

Released in America in June 1970, the single was commercially unsuccessful; only a few hundred copies sold. It was also issued in the UK, but was similarly unsuccessful there.