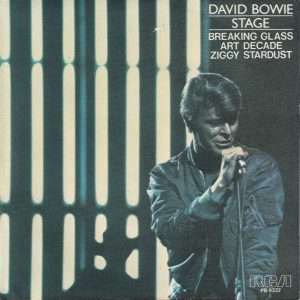 “Breaking Glass” was originally a track on Bowie’s 1977 album Low, a reworked version of the song was a regular on the singer’s 1978 tour. A live version from that tour was used as the lead track on a 7″ EP to promote Bowie’s second live album, Stage in 1978. The EP reached number 54 on the UK Singles Chart in December 1978.

In the US, the track “Star” was chosen as the lead track for the live EP (with “What in the World” and “Breaking Glass” as B-sides), but failed to chart, while in Japan “Blackout” was released to promote Stage.

Live versions
A spring 1978 live version recorded on the Heroes tour was released on Stage and on the above-mentioned single. This live version was also released as the B-side of the single “Star” in 1978.

A live performance filmed on 12 September 1983 was included on Serious Moonlight (1983 film).