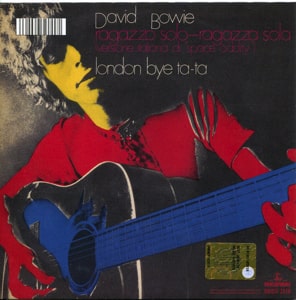 Ragazzo Solo, Ragazza Sola, the Italian language variation of Space Oddity, is getting a special blue vinyl 7” release to celebrate the opening of David Bowie Is at the Museum Of Modern Art (MAMbo) in Bologna, Italy.
The Italian vocal for Ragazzo Solo, Ragazza Sola (which translated means Lonely Boy, Lonely Girl) is not Space Oddity sung in Italian, it’s an entirely different song with Italian lyrics written by Mogol and sung in Italian by Bowie to the same music as Space Oddity.
The single was originally released in Italy in 1970. The new version will be released in a variation of its original Italian picture sleeve, as pictured here, and with a different b-side to the original.
A significant quantity of the limited edition red vinyl iSELECTBOWIE will also be made available at MAMbo.

The MAMbo run of David Bowie Is commences on July 14th and will run through to November 13th 2016. This will be the last chance to visit the V&A’s record breaking exhibition in Europe before it goes to Japan in January 2017. More details here: http://smarturl.it/DBisMAMbo
#DBisMAMbo #DavidBowieIs #BowieVinyl