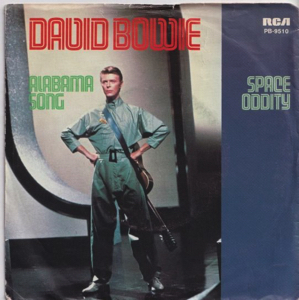 The “Alabama Song”—also known as “Moon of Alabama”, “Moon over Alabama”, and “Whisky Bar”—is an English song written for Bertolt Brecht by his close collaborator Elisabeth Hauptmann in 1925 and set to music by Kurt Weill for the 1927 play Little Mahagonny. It was reused for the 1930 opera Rise and Fall of the City of Mahagonny and has been notably covered by David Bowie.

Bowie, a Brecht fan, incorporated the song into Isolar II, his 1978 World Tour. He cut a version at Tony Visconti’s studio after the European leg of the tour, and in 1980 it was issued as a single to hasten the end of Bowie’s contract with RCA.

With unconventional key changes, the track “seemed calculated to disrupt any radio programme on which it was lucky enough to get played”. Nevertheless, backed with a stripped-down acoustic version of “Space Oddity” recorded in December 1979, the single reached #23 in the UK. Although Bowie also changed the “little boy” line like Morrison, he sang Weill’s original melody.

Bowie would appear in a BBC version of Brecht’s Baal, and release an EP of songs from the play. He performed “Alabama Song” again on his 1990 Sound+Vision Tour and 2002 Heathen tours.

Live versions
A concert performance recorded in spring 1978 was released as a bonus track on the Rykodisc reissue of Bowie’s live album Stage in 1991 and on the 2005 reissue of that album.

Other releases
It was released as the B-side of the Japanese single “Crystal Japan” in February 1980.
The German release of the single “Ashes to Ashes” in August 1980 had “Alabama Song” as the B-side.
In 1992 it was released as a bonus track on the Rykodisc reissue of Scary Monsters (And Super Creeps).
It appeared on the compilation The Singles Collection in 1993 and on The Best of David Bowie 1980/1987 in 2005.