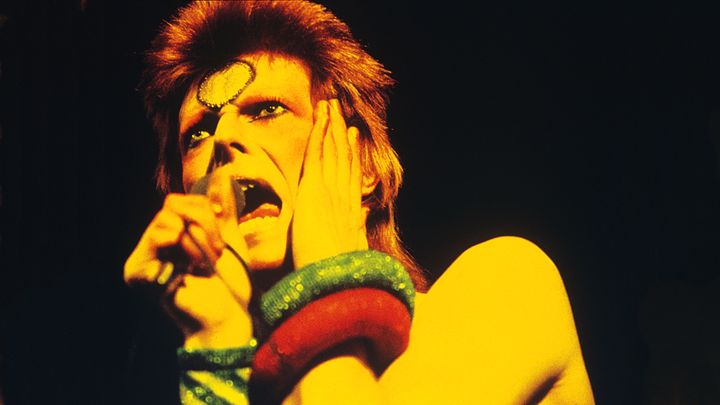 “What I did with my Ziggy Stardust was package a totally credible, plastic rock & roll singer – much better than the Monkees could ever fabricate,” David Bowie later said of his definitive alter ego. “I mean, my plastic rock & roller was much more plastic than anybody’s. And that was what was needed at the time.”  In fact, what Bowie concocted on 1972’s The Rise and Fall of Ziggy Stardust and the Spiders From Mars was more than just a fresh, clever concept. Ziggy was a tight and cohesive song cycle that laid out a visionary direction for pop music, setting a new standard for rock & roll theatricality while delivering his synthetic ideal with campy sex appeal and raw power.

“Listening to [Ziggy Stardust] was a bit like going to college, like the Beatles,” says Soundgarden’s Chris Cornell, who has covered the album’s “Lady Stardust” in concert. “The songwriting is incredible … [I] loved every single song on the album.”

Bowie had been building up to something like Ziggy Stardust for a while. But the root inspiration for the album’s theme went deep into his past.

During the mid-Sixties, Bowie had met pioneering British rocker Vince Taylor, who had recorded the 1959 classic “Brand New Cadillac” (later covered by the Clash on London Calling). After too many drugs and an emotional breakdown, Taylor had joined a cult and decided that he was an alien god on Earth.

Bowie’s fascination with space travel and science fiction had already surfaced in such songs as “Space Oddity” and “Life on Mars?” but he was being drawn toward something grander in scope. “Until that time,” he later said, “the attitude was ‘What you see is what you get.’ It seemed interesting to try to devise something different, like a musical where the artist onstage plays a part.”

He began developing a character based on Taylor, as well as on other eccentrics like Texas “psychobilly” singer Legendary Stardust Cowboy and Japanese designer Kansai Yamamoto. “He always described how he’d take bits and pieces from all over the place, put them in a melting pot and they’d come out being him,” said producer Ken Scott.

Bowie dubbed this new creation “Ziggy Stardust” (first name taken from a tailor’s shop that he saw from a train). As he fleshed out the concept further, Ziggy became an omnisexual alien rock star, sent to Earth as a messenger. Bowie’s plot, loosely, was that humanity was in its final five years of existence, and Ziggy was dispatched to deliver a message of hope: He’s a wild, hedonistic figure (“well-hung and snow-white tan”), but at his core communicates peace and love; he’s the ultimate rock star. And in the end, he is destroyed by his own excesses and by his fans.

“Ziggy is advised in a dream by the infinites to write the coming of a starman … this amazing spaceman who will be coming down to save the Earth,” Bowie explained to William S. Burroughs in a Rolling Stone interview. “Ziggy starts to believe in all this himself and thinks himself a prophet of the future starmen. He takes himself up to the incredible spiritual heights and is kept alive by his disciples. When the infinites arrive, they take bits of Ziggy to make themselves real, because in their original state they are anti-matter and cannot exist on our world. And they tear him to pieces onstage during the song ‘Rock ‘n’ Roll Suicide.'”

It made a certain amount of sense – at least as much as, say, the Who’s Tommy. But it’s still unclear whether Bowie had planned Ziggy Stardust as a narrative, or if he retrofitted the story after he had the songs. “To me, three songs link together – ‘Ziggy Stardust,’ ‘Lady Stardust‘ and ‘Star,’ because they’re all about the same person – and after that, it’s a bunch of songs that work together,” said producer Scott. “I’ve heard people say it’s about a guy who comes to save the world from outer space,” said bassist Trevor Bolder, “but to me, it’s just songs.”

The band Bowie had solidified during the Hunky Dory sessions – guitarist Mick Ronson, Bolder and drummer Mick Woodmansey – was living together in a communal house. Rechristened the Spiders From Mars, they went into Trident Studios in November 1971 and bashed out most of the album in 10 days (remarkably,Ziggy Stardust was largely completed before Hunky Dory was released a month later in December). “They had to get the tracks fairly quickly because David gets bored,” said Scott. “If it took more than three or four takes, he’d want to move on. … David was the most amazing singer I’ve worked with; 95 percent of the vocals on the four albums I did with him as producer, they were first takes.”

“He made you play on a knife-edge,” said Woodmansey. “You couldn’t go for anything you weren’t 110 percent committed to.” The eventual opening track, the dramatic and ominous “Five Years,” was a “kind of end-of-the-world song,” said the drummer. “It had to set off the atmosphere for the album.” These sessions also included the mission-statement title song and five other tracks that would make the album. But when Bowie delivered the music to RCA Records, the label said they didn’t hear a single. For once, this judgment proved wise; in response, Bowie wrote “Starman,” which would be the record’s breakthrough track, replacing a cover of Chuck Berry’s “Around and Around.”

In February 1972, the band cut the new song, as well as final takes of the snarling glitter rave-up “Suffragette City” and the riveting “Rock ‘n’ Roll Suicide.” One song recorded during the Hunky Dory sessions, “It Ain’t Easy,” was also added to the Ziggy lineup; it featured keyboard wizard Rick Wakeman – who said that Bowie had asked him to join the new band, but that Yes had invited him to be part of their group on the same day. Once the recording was done, Bowie turned his attention to the broader Ziggy plan. He started talking up the apocalyptic epic to the media. “He wanted to change the music industry,” said Bolder. “He thought it was boring.” He took the band members to the ballet and the theater, instructing them to watch the lighting instead of the performances. “That was a revelation,” said Woodmansey. “We got into the practice of creating a show, rather than just making music.”

Bowie spent months crafting the clothing and image for the Spiders – including his own signature orange mullet – looking to out-glam and out-shock acts like Marc Bolan and Alice Cooper. Immediately prior to the show that would debut the Ziggy material and staging, Bowie gave an interview to Melody Maker in which he announced that he was gay.

But the first Ziggy Stardust tour of the U.K. landed with a thud, and when the album was released in June, it started slowly. An electrifying July performance of “Starman” on the BBC’s Top of the Pops changed all that, delivering the sexually charged Ziggy in full regalia into England’s homes. The album exploded, and by the summer of 1973, Bowie had five albums in the British Top 40, three of them in the Top 15. By the time he and the Spiders set off for a U.S. tour in September, it was pandemonium.

Paul McCartney, Mick Jagger and Lou Reed were hanging around rehearsals. Fans were convinced the band really were space aliens. When they stopped in Moscow, on the way to Japan, they were detained by armed guards and taken to see Red Square in a limo with blacked-out windows, for fear their appearance would incite a riot.

The adulation, and the blurring of the lines between Bowie and Ziggy, began taking a toll on the singer. “At first, I just assumed that character onstage,” he said. “Then everybody started to treat me as they treated Ziggy: as though I were the Next Big Thing, as though I moved masses of people. I became convinced I was a messiah. Very scary. I woke up fairly quickly.”

So in the summer of 1973, at the Hammersmith Odeon, with legendary documentarian D.A. Pennebaker’s cameras rolling for a concert film, the singer made the stunning proclamation that this was Ziggy’s final show. He confirmed in an NME interview that “from now on, I’ll be concentrating on various activities that have very little to do with rock and pop.” It was almost one year to the day after the Top of the Pops performance that had kicked off Ziggy-mania.

“Most rock characters that one creates usually have a short life span,” Bowie explained. “I don’t think they’re durable album after album. Don’t want them to get too cartoony.”

Bowie was sometimes dismissive of the Ziggy Stardust phenomenon. “Most people still want their idols and gods to be shallow, like cheap toys,” he told Cameron Crowe. “Why do you think teenagers are the way they are? They run around like ants, chewing gum and flitting onto a certain style of dressing for a day; that’s as deep as they wish to go. It’s no surprise that Ziggy was a huge success.”

But Ziggy had achieved what Bowie set out to do – he altered music forever by introducing the notion of the rock star as a fearless changeling who could recast image and persona when necessary, whether the audience was ready or not.

Years later, Woodmansey, the only surviving original member of the Spiders From Mars, tried to describe the experience: “You walk out into a place, and there’s 20,000 people all trying to look like you,” he said. “You occasionally think, ‘Hang on, I’m from Driffield!’ But everyone thinks you’re from Mars.”

1 thought on ““Ziggy Stardust”: How Bowie Created the Alter Ego That Changed Rock”