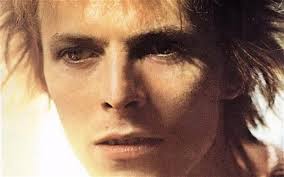 David Bowie was so otherworldly and timeless that when news broke of his death , many fans assumed it was a mistake. Once his son confirmed it, fans began mourning. One of the biggest pop stars of his time, Bowie had stunning range in style even as his vocal talents remained consistently compelling. Unlike many pop artists, he aged gracefully in both appearance and style. His last album, released only days ago, is about preparation for death, as compared to his early triumph Ziggy Stardust, a rock opera about an alien rock star.

So where to begin if you weren’t along for the entire journey or were born late into it? Oh who knows. But here are 20 songs and videos that are favorites .

This is really what started it all, even if David Bowie had been trying to break out for years. This was a perfectly timed piece, ready for a world made curious about space exploration during the time of the lunar landings. A great BBC documentary on the making of the later album Ziggy Stardust has some great footage of David Jones before he was David Bowie. It’s really striking how many false starts he had before Ziggy, and even this.

Not just the title track but the entire album is great, and a major influence on everyone from Siouxsie Sioux to Kurt Cobain, both lyrically and musically.

This is one of my favorite tracks from the great Hunky Dory, where Bowie’s alter ego Ziggy Stardust really got his start.

Wham bam thank you ma’am. You should really listen to the entire album start to finish, from an era when albums told entire stories in addition to the story of a given track. This album, The Rise and Fall of Ziggy Stardust and the Spiders from Mars, is about a fictional rock star from space who sends extraterrestrial messages about politics, drugs and sex.

The driving R&B riff really sells the Americana of this song, which captures the early 1970s well.

This is from Pin Ups, an album of covers. Bowie influenced everyone, but it’s nice to see who influenced him. He said this album contained some of his favorite music of the era. This song had been a big hit by Liverpool band The Merseys.

This song, from Diamond Dogs, is Bowie’s farewell to glam culture. I’m not sure this song is the best representation of that album, which is dark and chaotic and a good link between glam culture and punk.

Bowie said he wanted to write a musical based on Orwell’s 1984. This track from the album makes you wish he had.

Come for the guitar riff, stay for the anger at record companies.

I feel a bit bad for loving this album so much, as Bowie says it was made during the darkest time in his life. Also that I didn’t quite realize that the themes were more about using Biblical imagery for occultish ends and blasphemy than mere religious speculation. He was involved in black magic and his ironic embrace of fascism was becoming less ironic than embrace. Also, in trying to avoid the darkness of Los Angeles, he found himself in Berlin with his new friend heroin. This was the era of the Thin White Duke and the Victoria Station Nazi salute, after all, much of which he blames on being drug addled. He said that parts of this album were about protecting himself from some of these dark influences.

Some of Bowie’s best and most autobiographical work is instrumental, somehow. His later Wedding Song is a good example of same. This one, from Low, is a good reminder of the tremendous influence of Brian Eno.

Even when mocking the power and cult status of disc jockeys, Bowie takes it to a new level. Bowie supposedly was trying to sound like David Byrne here. He succeeded.

David Bowie’s drug use rendered him incapable of taking care of family responsibilities and forming healthy relationships. He came to terms with the downsides of his drug-fueled successes in this album and the previous one, while still struggling toward sobriety for years. This track is melancholic and poignant and well produced.

Listening to Freddie Mercury and David Bowie’s vocal track in isolation is worth it. Producers marveled at how few takes David Bowie needed on even lengthy tracks. He was just in a state of near perfection most of the time. The emotion and beauty in his voice is difficult to match. This track will make you wish he and Freddie had collaborated more.

One of the best pop songs ever written, featuring guitar work by Stevie Ray Vaughan and Nile Rodgers. Bowie has said he was completely unprepared for the level of success this song had, as he was still working on sobriety and the arena tour-level of celebrity made that difficult. Also, he was simply not used to being so inside the mainstream of pop.

Because of his previous alien alter-egos, many critics thought this was a discussion of similar topics. In fact, it is a song about loving Muslim neighbors, long before he fell in love and married Iman, who was raised Muslim. Bowie didn’t love this album, but it holds up fairly well.

This is not just a wonderful song, but this is a particularly touching version, sung in front of the Berlin Wall while East Germans crowded nearby.

“I’ll never forget that. It was one of the most emotional performances I’ve ever done. I was in tears. They’d backed up the stage to the wall itself so that the wall was acting as our backdrop. We kind of heard that a few of the East Berliners might actually get the chance to hear the thing, but we didn’t realize in what numbers they would. And there were thousands on the other side that had come close to the wall. So it was like a double concert where the wall was the division. And we would hear them cheering and singing along from the other side. God, even now I get choked up.”

This is one of those albums you really need to listen to in its entirety, but if you just listen to the first track here, that’s a good start. The album began with some music he wrote for his wedding to his wife Iman, including that top track. It also deals with race riots in Los Angeles and his brother’s suicide due to schizophrenia. And it’s a great dance album, to boot. It also might be the first good album made in true health, after many years of imbalance in his personal life and professional life.

David Bowie was the very intentional product dreamed up by David Jones (a good BBC story about that is here). He was widely read (list of influences here). And he was interesting in every interview. Here he discusses the internet in 2000 and seems to surprise interviewer Jeremy Paxman when he says that the internet is more like a visit from a Martian than a simple development in technology. Very interesting.

I don’t love much of the Bowie hits from this era, so I’m a bit light on the links. Here, if you want something, try Dead Man Walking. Actually, try this acoustic version, which is even better.

This single and its accompanying album were released without much fanfare a few years ago. The lack of attendant interviews made some reviewers wonder if Bowie was unwell or dying. It certainly does begin dealing with themes and images of death in a way that Black Star does to great effect. This video carries on the legacy of Bowie as symbolist and the song is worth listening to over and over.

Released just days before his death, Bowie says goodbye in an album filled with Biblical imagery and a focus on death, resurrection and forgiveness. His religious interests spanned from Buddhism to Judaism and Christianity. From an interview when he was asked why he led the Lord’s Prayer at a Freddie Mercury tribute:

DAVID BOWIE: I decided to do it about five minutes before I went on stage. Coco [Schwab, Bowie’s long-term personal assistant] and I had a friend called Craig who was dying of AIDS. He was just dropping into a coma that day. And just before I went on stage something just told me to say the Lord’s Prayer. The great irony is that he died two days after the show.

….In rock music, especially in the performance arena, there is no room for prayer, but I think that so many of the songs people write are prayers. A lot of my songs seem to be prayers for unity within myself. On a personal level, I have an undying belief in God’s existence. For me it is unquestionable.

….Looking at what I have done in my life, in retrospect so much of what I thought was adventurism was searching for my tenuous connection with God. I was always investigating, always looking into why religions worked and what it was people found in them.
He goes on to discuss his time in black magic — the whole interview is interesting.

So there you have it. Twenty clips that are worth your while to help you remember what a great influence David Bowie has been since the 1960s.