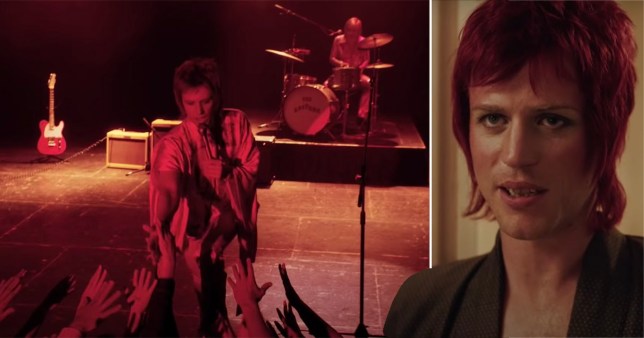 The trailer for Stardust has been released and gave us a glimpse into the life of David Bowie before he became a global icon. Director Gabriel Range brought the late music star’s life to the screen with a story that follows Bowie as he goes on his first ever music tour across the United States. The film will have fans witnessing Bowie – played by Johnny Flynn -create his alter ego Ziggy Stardust. ‘Meet David before Bowie,’ the synopsis reads, ‘one of the greatest icons in music history. But who was the young man behind the many faces?

‘In 1971, a 24-year-old David Bowie (Flynn) embarks on his first road trip to America with Mercury Records publicist Ron Oberman (Marc Maron), only to be met with a world not yet ready for him.’ The trailer starts with Bowie arriving in America (in great outfits, of course) as he struggles in believing himself before finding his alter ego. Stardust – Trailer Play Video Loaded: 0% 0:00Progress: 0% PlayMute Current Time0:00 / Duration Time2:08 Fullscreen × Embed this video Copy Code

The 24-year-old Bowie is trying to connect with an audience that isn’t ready for the genius that is him. During his long journey, Bowie quickly understands he needs to reinvent himself completely. Other cast members include Jena Malone, who recently starred in the horror film Antebellum.

Coming off the tails of 2018’s Bohemian Rhapsody, and 2019’s Rocketman, you might expect the upcoming David Bowie film Stardust to be a smashing biopic about the musical career of a legend, but it’s not. Instead, it’s a character study, done via road trip, without a single Bowie song in it.

The Stardust trailer dropped yesterday and has so far been greeted with much chagrin from Bowie fans. There are certainly a few reasons for that, but the biggest is that the film was never granted the rights to use Bowie’s songs and isn’t endorsed by the Bowie Estate. David Bowie’s son Duncan Jones posted about Stardust on Twitter, stating that, “This movie won’t have any of dads music in it, & I can’t imagine that changing. If you want to see a biopic without his music or the families blessing, thats up to the audience.”

According to a statement Stardust’s producers sent to Entertainment Weekly, “The film was written as an ‘origins story’ about the beginning of David’s journey as he invented his Ziggy Stardust character, and focuses on the character study of the artist, as opposed to a hits driven ‘music’ biopic.”

Curiously, the film starts by stating, “What follows is (mostly) fiction,” according to Indie Wire reviewer Kate Erbland, who saw the film at the digital Tribeca Film Festival. However, it may have strayed too much into fiction, as fans appear to be displeased with both its lack of Bowie music, and its depiction of the man.

Stardust follows British star David Bowie (Johnny Flynn) and his publicist Ron Oberman (Marc Maron) as they roadtrip across America shortly after the release of his early album, The Man Who Sold the World. Set before Bowie’s career truly takes off, he’s struggling to find his footing in the music world. The film chronicles how that insecurity leads to Bowie creating his iconic stage character Ziggy Stardust.

However, some fans took issue with the trailer immediately. On YouTube, user dirkbogarde44 comments under the trailer: “[Flynn] doesn’t look like him, sound like him, behave like him…..Bowie wasn’t this introspective, worried, miserable character…….he was self-aware, very funny, intelligent and always on the make. That is not the guy I’m seeing in this trailer.”

Not all the commentators agree that Bowie wasn’t introspective, but many feel that Flynn misses the essence of Bowie. In comparison, fans and Queen members alike were impressed with how much the cast of Bohemian Rhapsody looked like their real life counterparts. User MrTurnerdcentury underscores the issue quite simply by quoting one of Bowie’s lines in the trailer, “Rockstar or someone impersonating a rock star: what’s the difference?” and responds by saying, “I think you answered your own question. This looks like a real stinker.”

What comes up again and again, though, is how this film seems to go against the late Bowie’s wishes. User EFO comments, “I’m not watching this movie, the lad looks nothing like David Bowie; besides, the family didn’t give them the permission for this and here they are releasing it only for the money.” Thus, fans see it as disrespectful.

Interestingly, while many fans aren’t too pleased with Flynn as Bowie in the trailer, reviewer Erbland thought his performance was one of the better parts of the film. Similarly, Bohemian Rhapsody’s star Rami Malek was applauded for his portrayal of Freddie Mercury, even while the rest of the movie fell flat for many critics. Meanwhile, Rocketman achieved the best of both worlds, as it received both positive reviews and its lead, Taron Egerton, won a Golden Globe. However, Stardust was never trying to be either of those films. So it remains to be seen if that choice pays off when it’s released November 25, in theaters and on VOD.