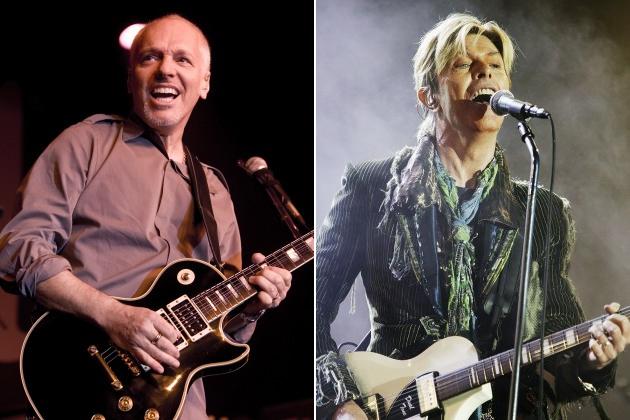 David Bowie‘s 1987 album ‘Never Let Me Down’ is considered to be among his worst, but for Peter Frampton, its importance can not be overstated. In a new interview, he credits his time with Bowie, both on the album and its accompanying tour, for helping revive his career.

“The ’80s were a difficult period for me,” he told M Magazine. “It wasn’t until my dear friend David Bowie got me out on the road for the ‘Glass Spider’ tour and on his ‘Never Let Me Down’ record and reintroduced me as a guitar player around the world. I can never thank him enough for believing in me, and seeing past the image of the satin pants and big hair to the guitar player he first met when we played together in school.”

Bowie and Frampton became friends when they were students at Bromley Technical School, but had never worked together in their professional career until ‘Never Let Me Down.’ At the time, Frampton’s career had stalled when the massive success of 1976’s ‘Frampton Comes Alive!’ was met head-on by the failure of the ‘Sgt. Pepper’s Lonely Hearts Club Band’ movie two years later.

Frampton released several albums after that, but none approached the heights of his seminal 1970s work. However, his recent ‘FCA! 35‘ tour shows that he has come to terms with his place in the rock world.

“It’s something…that I’m very at peace with and proud of,” he continued. “Look, the day that Frampton drops dead, the first sentence is going to be, ‘Peter Frampton, who was most famous for his album ‘Frampton Comes Alive!’…’ There’s no getting away from it, no matter what I do.”