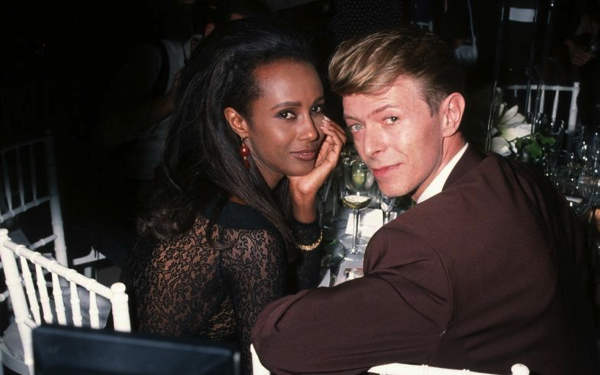 Let’s look at the adorable couple throughout the years:

We miss David Bowie every day. It’s been nearly a year-and-a-half since the rock god suddenly passed — just three days after the release of his last record, the rightfully acclaimed “Blackstar.” Yesterday, June 6, Iman, Bowie’s widow, made us cry: She posted to her Instagram account a black-and-white photo of the couple, to ring in what would have been their 25thwedding anniversary. Attached to it were the words, “I would walk forever, just to be in your arms again.”

Technically, Bowie and Iman were married in April 1992 in Switzerland, but they solemnized their union on June 6, 1992. The two met at a birthday party in Los Angeles in 1990. Bowie had been married before, to Mary Angela “Angie” Barnett, from 1970 to 1980, and he spent most of the ’80s at the height of his financial success yet cripplingly lonely at the top. When he met Iman, they immediately hit it off. He spent his time away from music close to her. In their final years together, they lived in the Lower East Side of New York City.

There are countless photos of the two — a striking pair. She’s a model, of course, and his looks were always changing, if not as aggressively in his time with her as in the 1970s. They were known to hobnob about NYC; you can see them at fashion galas and award shows, even at the premieres of movies, like “Hannibal” and “Gangs of New York.” When Bowie died, the sidewalk outside their apartment drew untold fans, who created a makeshift memorial, filled with records and pictures and memorabilia.

Iman’s post was inevitably flooded with comments and pictures, from fans still nursing a broken heart. Slide through the pictures up top to see one of the world’s most adorable and powerful couples.