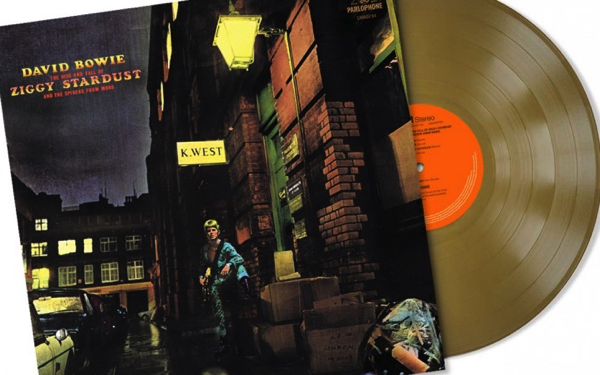 Parlophone have announced that three David Bowie albums are to be reissued next month.

The Rise And Fall Of Ziggy Stardust And The Spiders From Mars and Hunky Dory will be released on limited edition gold vinyl on June 16 – 45 years to the day since the original launch of Ziggy in 1972.

Parlophone report that both albums will “only be available as a strictly limited edition one-off run in ‘bricks and mortar’ stores and their online storefronts – but will not be available from online only retailers.”

In addition, Cracked Actor – Live Los Angeles ’74 will launch on the same day on CD and via digital services.

The record was previously released on triple vinyl to mark Record Store Day 2017.

The package will be available on limited edition 2CD digipak with a 12-page booklet featuring notes from the original LA Amphitheatre show, along with a piece about the LA ‘Philly Dogs’ shows from Rolling Stone’s Richard Cromelin from October 1974.

In March, The Rise And Fall Of Ziggy Stardust And The Spiders From Mars was selected for induction into the Library Of Congress’ National Recording Registry.

The library’s aim is to preserve recordings for posterity that are of “cultural, artistic and historical importance to American society” with Bowie’s work among a list of 25 records to be inducted this year.

Bowie and Mick Ronson are the cover stars of the new issue of Classic Rock magazine, which is on sale now.

Two of David Bowie’s most seminal records will be getting the Midas touch on 16th June. 1971’s ‘Hunky Dory’ and 1972’s breakthrough ‘The Rise And Fall Of Ziggy Stardust And The Spiders From Mars’ will be reissued on limited edition gold vinyl and made available exclusively through brick-and-mortar indie record stores, not unlike the way in which Record Store Day releases are made available. No word yet on how many are being made (though since we’re talking about David Bowie here, it’s likely to be a lot for modern day pressing standards – they made 15,000 of ‘Bowpromo’ Record Store Day release) but nonetheless, it’s likely to become something of an instant collectable. Going by the stock photo, it’s looking likely that these will simply be gold versions of the Parlophone records reissues that were released shortly after Bowie’s death, rather than whole new pressings.

A CD issue of the Record Store Day vinyl-only release ‘Cracked Actor -Live Los Angeles ’74’ is also due to be released on 16th June.  Initially the live set will be released as a limited edition digipak with a 12 page booklet not included with the vinyl version and, once that’s gone out of print, a standard jewel case CD version will be issued to replace it.  While it has been confirmed that digital downloads also be available, it has also been categorically stated that the album will not be reissued on vinyl.

The album, released as part of Record Store Day, is a special one-off recording of the artist in Los Angeles in 1974. This gig, from the apt Philly Dogs Tour, has gone down as one of Bowie’s great legacy shows. Remaining completely unreleased until last month, the record was the biggest selling vinyl akbum on Record Store Day this year.

The show was one of the first to feature his long-time collaborators and touring band members, Earl Slick and Carlos Alomar.

Cracked Actor was produced by David Bowie and mixed by Tony Visconti at Human Studios, NYC in October and November 2016.

‪The gold vinyl versions of The Rise and Fall of Ziggy Stardust and the Spiders from Mars and Hunky Dory are being released 45 years to the day of the first issuing of Ziggy. They will only be available as a strictly limited edition one-off run in ‘bricks and mortar’ stores and their online storefronts, but will not be available from online only retailers.

The record will be issued as a limited edition Gold vinyl, and as 2-CD and download edition.