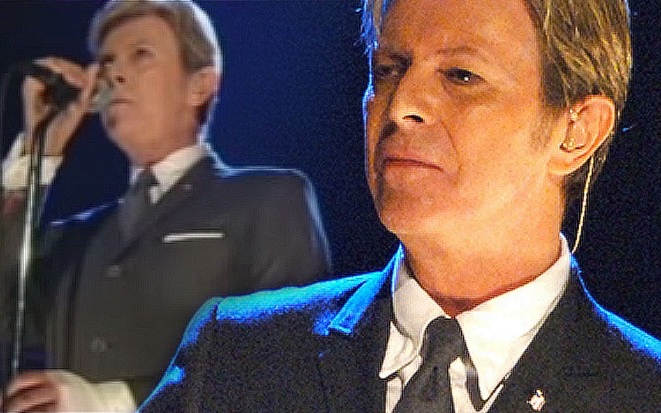 Davids last live performance at the liverocks concert in 2006. This is him sick after a heart attack the previous year. You can clearly see he is bruised and weathered with an IV bandage on his hand and wearing slippers.

While David Bowie’s January 2016 death came as a tremendous shock, what made his passing all the more tragic was the sudden revelation of the health issues that plagued the singer in the last decade or so of his life – both an explanation for his seemingly sudden death and for his noticeable absence from the stage in recent years. A massive heart attack suffered onstage in Germany in 2004 effectively ended Bowie’s touring career and aside from a string of one off performances here and there, that was the last of David Bowie as an entertainer; but in 2005, the Thin White Duke defied the odds and made a triumphant return to the stage.

Introduced by r&b songstress Alicia Keys, David appeared at the Fashion Rocks show at Radio City Music Hall in New York where, dressed smartly in a tailored suit and bearing the scars of his recent health battles, he stole the show and wowed the crowd with an almost supernatural rendition of “Life On Mars”.

Fun Fact: Even though it was a huge hit single, Bowie never performed the song “Under Pressure” before a live audience until the 1992 Freddie Mercury Tribute Concert.

Despite his lengthy absence from the stage and a noticeable fatigue that wasn’t there before, David’s stage presence is no less formidable as he hits the notes in “Life On Mars” that we never thought we’d hear him sing again and it’s a testament to the man’s fighting spirit that the show quite literally went on until it simply couldn’t any longer.

While he would go on to perform at least twice more in later years before retiring from live performances completely, this is ultimately one of our last glimpses of the man who fell to earth – and what a good one it is.

It’s a god-awful small affair
To the girl with the mousy hair
But her mummy is yelling, “No!”
And her daddy has told her to go
But her friend is nowhere to be seen
Now she walks through her sunken dream
To the seat with the clearest view
And she’s hooked to the silver screen

Sailors fighting in the dance hall
Oh man!
Look at those cavemen go
It’s the freakiest show
Take a look at the Lawman
Beating up the wrong guy
Oh man! Wonder if he’ll ever know
He’s in the best selling show
Is there life on Mars?

It’s on America’s tortured brow
That Mickey Mouse has grown up a cow
Now the workers have struck for fame
‘Cause Lennon’s on sale again
See the mice in their million hordes
From Ibiza to the Norfolk Broads
Rule Britannia is out of bounds
To my mother, my dog, and clowns

Sailors fighting in the dance hall
Oh man!
Look at those cavemen go
It’s the freakiest show
Take a look at the Lawman
Beating up the wrong guy
Oh man! Wonder if he’ll ever know
He’s in the best selling show
Is there life on Mars?