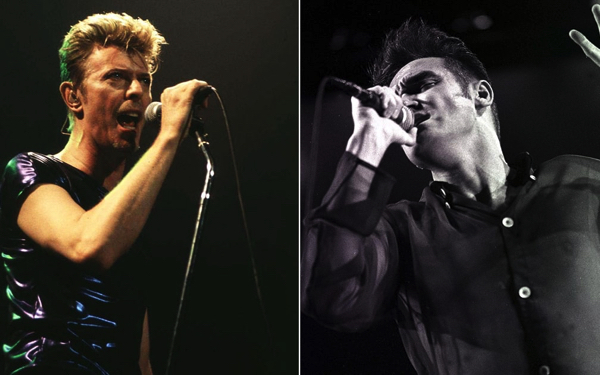 Surprise performance came at end of a 1991 Morrissey show in L.A., a couple of years before the two of them had a public falling out

As a sullen teenager growing up in Manchester, Morrissey clung to his musical heroes like David Bowie, T. Rex and the New York Dolls as a way to get through the horrible grind of his day-to-day life. His first concert was T. Rex on June 16th, 1972, and a few months later David Bowie came to town on his Ziggy Stardust tour. Morrissey waited outside the venue with a note in hand to pass along to his hero.
“He emerges from a black Mercedes,” Morrissey writes in his 2013 memoir Autobiography, “every inch the eight dimension, teetering on high heels, with all the wisdom of our ancestors. Smiling keenly, he accepts the note of a dull schoolboy whose overblown soul is more ablaze than the school blazer he wears, and thus I touch the hand of this inexplicably liberating reformer.”

The 13-year-old who passed along a note to Bowie that afternoon couldn’t have possibly imagined that two decade later he’d be not only headlining a concert at the Forum in Los Angeles, but that Bowie himself would saunter onstage for the encore and join him on a cover of “Cosmic Dancer” by T. Rex. “He is stately against my last-gasp exhaustion,” Moz wrote in Autobiography. “The 12-year-old within me – unable to leave for school unless I’d soothed my sickness with at least one spin of ‘Starman’ – bathes in the moment in disbelief. But there it is.” There’s no film of the moment and the audience recording is far from great, but here it is.
Three years later, Morrissey agreed to open up for Bowie on the Outside tour, but after getting a poor reception from the crowds, quit early on, citing an illness that didn’t stop him from touring Japan on his own a couple weeks later. The tour defection must have stuck in Bowie’s head because, in 2006, he declined an offer from his producer Tony Visconti to produce a version of “You’ve Lost That Lovin’ Feeling” as a duet with Morrissey. “I loved this idea, but David wouldn’t budge,” Morrissey said in 2014. “I know I’ve criticized David in the past, but it’s all been snot-nosed junior high ribbing on my part. I think he knows that.”
Bowie went on to reject Morrissey’s proposal to use a photo of the two of them for his 2013 reissue of “The Last of the Famous International Playboys,” so maybe he didn’t know it was just “junior high ribbing.” This August, Morrissey name-checked several greats who died this year during a gig, including Caroline Aherne, Muhammad Ali and Prince, but didn’t mention Bowie. To be fair, Bowie died very early in the year and it’s hard to imagine that Morrissey doesn’t revere him even if they had some difficulties. Then again, the slight very well might have been intentional. You never quite know with Morrissey.