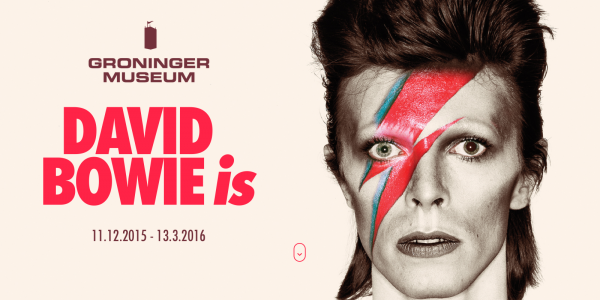 The successful exhibition David Bowie is will be on display in the Groningen Museum (the Netherlands) from 11 December 2015 onwards.

Ticket sale
Ticket sale starts online on 28 August 2015 on this website.
Keep an eye on the website for more information and subscribe to the email alert at the right side of the page, so you will be notified about the start of tht ticket sale.

David Bowie is, is the first international retrospective of the extraordinary career of David Bowie – one of the most pioneering and influential performers of modern times.
Over 300 objects including handwritten lyrics, original costumes, photography, set designs, album artwork and rare performance material from the past five decades were brought together from the David Bowie Archive for the very first time. It demonstrated how Bowie’s work has both influenced and been influenced by wider movements in art, design, theatre and contemporary culture and focussed on his creative processes, shifting style and collaborative work with diverse designers in the fields of fashion, sound, graphics, theatre and film.

The exhibition’s multi-media design introduced Sennheiser’s advanced sound technology alongside theatrical scene-setting, original animations and video installations to create an immersive journey through the artistic influences that Bowie has cited as formative.

Andreas Blühm, director of the Groninger Museum: “We are very happy and proud to have this exhibition in the Netherlands and to share the experience with our visitors. It is an imagination-boosting exhibition, not only for David Bowie fans, but for a broad public. On top of that the interface between fashion, design and contemporary art links up perfectly with the Groninger Museum”.

Around 300,000 people have already seen the David Bowie is exhibition at the Victoria & Albert Museum in London. A host of notable figures have visited the exhibition including Debbie Harry, Dame Vivienne Westwood, Robert Redford, Anna Wintour en Kate Moss