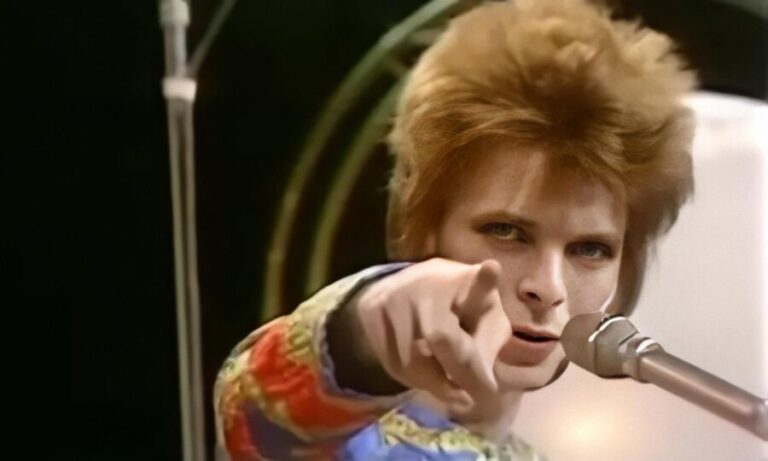 The day Ziggy Stardust, perhaps David Bowie’s ultimate creation, gave up the ghost and returned to his home planet he could have said goodbye with anyone of his brilliant songs. Instead, he paid homage to the past and delivered a simply searing cover of Chuck Berry’s ‘Around and Around’ as well as paying tribute to the starry songs which had seen him become one of the biggest rock stars on the planet.

With that in mind, we are dipping into the Far Out vault to bring you some rarely seen footage of Bowie, alongside his ample band the Spiders From Mars, as well as a little help from Jeff Beck, as they launch through the particularly brilliant rendition of Berry’s classic song. It’s not only a reminder of the talent that Bowie had within his grasp in the seventies, and beyond, but also of the searing imprint Chuck Berry left on the world of rock ‘n’ roll, one which will be there forevermore.

Ziggy Stardust, Bowie’s flame-haired alien from outer space, was one of the most outlandish, eccentric, exciting and ultimately talented kings of glam rock. With simply sensational aesthetic, Bowie took his creation to the top of the rock pile but while it’s obvious that Ziggy was a striking figure, it was always the music which underpinned everything he did. As part of the tour in 1973, a trip which went across the globe before returning to Britain, Bowie made sure to deliver a set full of impressive numbers.

It meant songs from his album Hunky Dory, Aladdin Sane and, of course, The Rise and Fall of Ziggy Stardust and the Spiders From Mars were littered across the 18-song setlist. But, with his album Pin Ups, a covers LP in all but name, also due out later that year, Bowie made sure to also provide a few brilliant covers too. Of course, though nobody knew it at the time, it would be the final tour for Ziggy.

Bowie had become tired of his alter-ego and was intent on killing him off. He did so on July 3rd in 1973 when he told his adoring hometown audience: “Of all the shows on the tour this particular show will remain with us the longest, because not only is it the last show of the tour, it’s the last show we’ll ever do.” Naturally, the audience gasped in horror, fearing this was the end of Bowie entirely.

We know now that Bowie was just hanging up Ziggy’s platform boots. But with such a large statement made, it suddenly made sense as to why the show was so ram-packed with nuggets of rock gold. As well as being joined by Jeff Beck on stage for a medley of ‘The Jean Genie’ and The Beatles’ song ‘Love Me Do’, the band also delivered as their final song, a cover of Chuck Berry’s song ‘Around and Around’. It was an inclusion which hinted at Bowie’s love of the granddaddy of rock, Chuck Berry.

It might not be the first song everyone thinks of when listing their favourite Chuck Berry tracks but ‘Around and Around’—the B-side to ‘Johnny B. Goode’—has had many admirers over the years including the Grateful Dead and The Animals. But, for us, there’s no better rendition than this one from David Bowie as he bids farewell to a man who had helped him grow from occasional chart-entry to the biggest rock star in the universe.