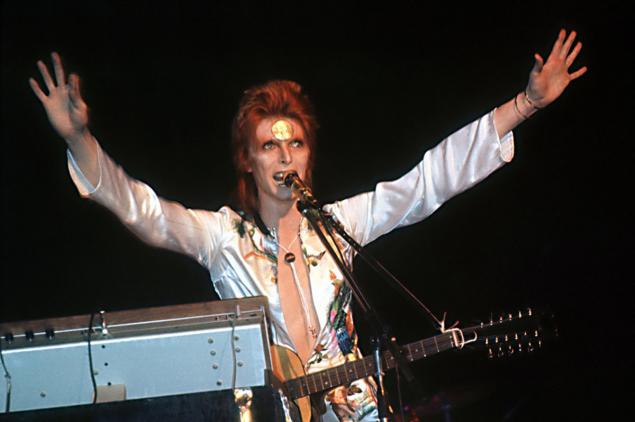 David Bowie as Ziggy Stardust in Japan in 1972.
(Originally published by the Daily News on October 8, 1972.

This story was written by Lillian Roxon.)

Great heavens, what a night it was! Angela Bowie jitterbugging in the aisles, Geri Miller, the same one who jumped naked out of Mick Jagger’s birthday cake, rushing to the stage with a sheaf of gladioli. Every groupie who ever lived, male or female or simply undecided, clomping around self-consciously in giant wedgies and silver makeup, determined to be noticed. David Bowie was making his New York debut in Carnegie Hall and no one who was anyone, not even Dave Gahr, the Time magazine photographer, or Albert Goldman, rock critic of Life, was about to miss that.

When Bowie made his entrance to the strains of Beethoven’s Ninth straight from the soundtrack of “Clockwork Orange” and a blinding display of strobe lights, the room gave him a standing ovation.

True, a few oldies shuffled uncomfortably at the sight of the thin, pale boy with the bright red hair and the artful makeup and the shiny quilted outfit that was tight enough to get him an X-rating on the spot, but what the old men don’t know, the little girls, as usual, understand, and before he’d sung one note you knew he was going to conquer not just New York but all of America with effortless ease.

Unlike what’s been coming from England lately, this was a classy act. It had rock, raunch, an incredible spectrum of color (including several costume changes), movement so graceful it must have been choreographed, nicely spaced patches of purely emotional acoustic material, the best enunciation since Dames Judith Anderson, and just enough shock value to keep everyone talking for days. 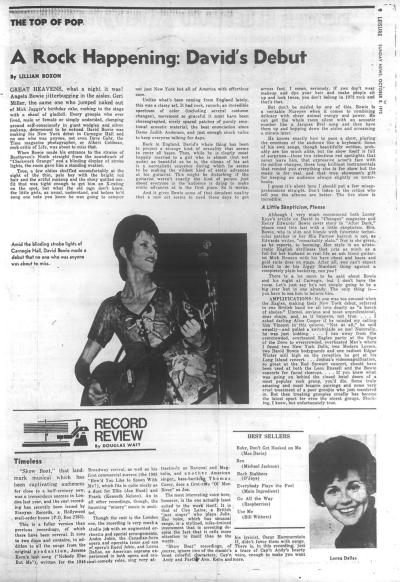 The New York Daily News published this article on October 8, 1972.

And it gives Bowie some of that decadent quality that a new act seems to need these days to get across fast. I mean, seriously, if you don’t wear makeup and dye your hair and make people sit up and look twice, you don’t belong in 1972 rock and that’s that.

But don’t be misled by any of this. Bowie is a veritable Nureyev when it comes to combining delicacy with sheer animal energy and power. He can get the whole room silent with an acoustic number like a Jacques Brel song and then have them up and bopping down the aisles and screaming a minute later.

He knows exactly how to pace a show, playing the emotions of the audience like a keyboard. Some of his own songs, though beautifully written, probably are too much alike, but the show itself is full of surprises – those two relentless red spotlights that never leave him, that expressive actor’s face with its million changes, those long brilliant instrumental that remind you everything else is for show but the music is for real, and that true showman’s gift for keeping an audience always slightly on tenterhooks. 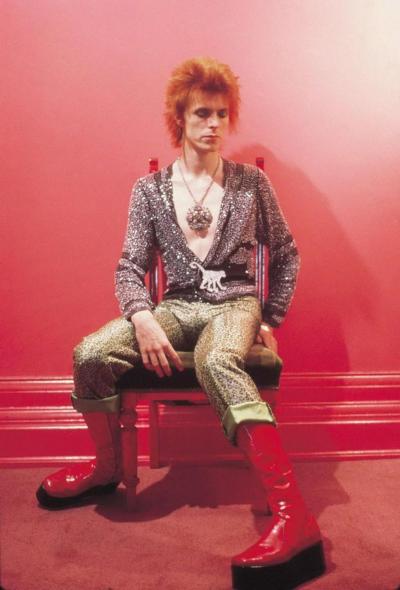 I guess it’s about here I should put a few misapprehensions straight. Don’t listen to the critics who tell you the albums are better. The live show is incredible.

Although, I very much recommend both Lenny Kaye’s article on David in “Changes” magazine and Henry Edwards’ Bowie cover story in “After Dark,” please read this last with a little skepticism. Mrs. Bowie, who is slim and blonde with futuristic technicolor patches in her Mia Farrow haircut is not, as Edwards writes, “remarkably plain.” Nor is she given, as he reports, to booming. Her style is an aristocratic English shrillness that acts as much as a foil for her husband in real life as ash blond guitarist Mick Ronson with his bare chest and boots and gold suits does on stage. After all, you can’t expect David to do his Ziggy Stardust thing against a completely plain backdrop, can you?

There is a lot more to be said about Bowie and his night at Carnegie, but I don’t have the room. Let’s just say he’s not simply going to be a big star but is one already. The only thing is – you have to see him to believe him.