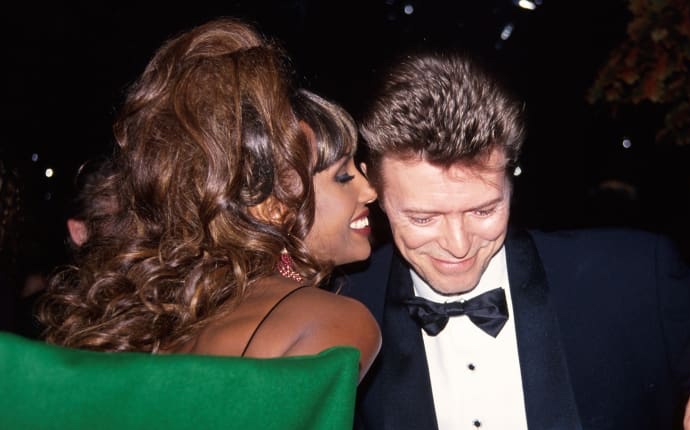 The marriage between the Ziggy Stardust performer and the model-turned-entrepreneur was intensely private—and lasting.

The 1992 marriage between an international music superstar and one of the world’s most recognized supermodels appeared to be a celebrity union made in tabloid heaven. But far from the salacious headlines and marital revelations celebrity journalists predicted, the marriage between David Bowie and Iman Abdulmajid proved to be a stable, long-lasting love affair played out far from the glare of the media spotlight.

“You would think that a rock star being married to a supermodel would be one of the greatest things in the world. It is,” Bowie once reportedly said of his marriage.

The couple met in 1990 at a dinner party. Iman had recently retired from modeling and her hairdresser introduced her to the British singer-songwriter. For Bowie, it was love at first meeting. “My attraction to her was immediate and all-encompassing,” he told Hello! magazine in 2000. “I couldn’t sleep for the excitement of our first date. That she would be my wife, in my head, was a done deal. I’d never gone after anything…with such passion in all my life.”

Her effect on the usually unflappable and smooth Bowie was intense. “I found her intolerably sexy,” Bowie said during an interview with Entertainment Tonight when asked about their initial meeting. “I think I did something really corny the next day. I think I invited her to afternoon tea somewhere.” According to Iman, Bowie told her he was nervous, simply saying “tea?” as a question. “He doesn’t drink tea; he never drinks tea. He had coffee,” she recalled of their first date.

It took a further two weeks before Iman was as on board with the relationship as Bowie. “His actions spoke louder [than words],” she said to The Cut in 2011. “I was coming from Paris and I got to L.A. at the airport and the doors open to the plane and I come out and I see all these people taking a picture of somebody. And he was standing there, flowers in hand, no security. That was when I knew he was a keeper. He didn’t care if anybody saw.”

The new couple made their first public appearance together in November, 1990, at an event benefitting AIDS research, though Iman was still hesitant about diving into a union with a rock star, telling The Guardian in 2004 she definitely “didn’t want to get into a relationship with somebody like him. But as I always said: I fell in love with David Jones. I did not fall in love with David Bowie. Bowie is just a persona. He’s a singer, an entertainer. David Jones is a man I met.”

Bowie proposed in Paris and they were married on April 24, 1992, first in a private ceremony in Lausanne, Switzerland. The union was then solemnized on June 6 in Florence, Italy. “It rained!” Iman recalled in 2012 of their nuptials. “They said, ‘Oh, you shouldn’t complain, you’re going to be married for 50 years, it’s going to be happy.’ And they were right.”

Both had been married before. Bowie—born David Robert Jones in 1947—was married to fellow Brit Mary Angela (Angie) Barnett from 1970 to 1980, and together they had a son, Duncan Jones, in 1971. Somali-born Iman—born Zara Mohamed Abdulmajid in 1955—was married to first husband Hassan from 1973 to 1975, and then to American pro basketballer Spencer Haywood in 1977. The union produced a daughter, Zulekha Haywood, in 1978 and the couple divorced a decade later.

Iman and Bowie approached their marriage as a relationship to be shared with each other, not a public eager to hear intimate details about the “Space Oddity” singer and Vogue cover star. Aside from rare occasions, the couple kept the press separate from their home life.

They were rarely photographed together, appearing as a couple only in one Vogue magazine shoot and for a Hello! interview in their New York apartment following the birth of their daughter Alexandria in 2000, which Iman described as one of “the happiest times in my life,” and an event that drew the couple closer than ever before. “There’s a joy or a contentment that’s almost palpable to both of us. Overnight, our lives had been enriched beyond belief.”

Of parenting their daughter, Iman once said that Bowie was “measured, sensible yet at the same time fun and relaxed with Lexi. I’m the disciplinarian.” What they both agreed on was keeping their home life as private as possible.

In a 2014 interview with The Guardian, Iman spoke of how they kept a low profile, regardless of where they were in the world. “We went this summer [to London]. And no one knew we were there!… Every day we went and did different things and the press never knew! It’s absurd this idea that celebrities can’t be anonymous. We even went to the London Eye. We queued separately, Lexi had a friend with her and they went with the bodyguard and then we all met on board.”

Quizzed over the whereabouts of her husband while attending a New York Valentine’s Day event solo in 2011, Iman told The Cut that they never celebrated the annual lovefest in public. “We never do Valentine’s dinner, because everybody, they look,” she said. “On Valentine’s, imagine me and David going to a restaurant! Like everybody’s going to say, ‘Did they talk? Did they hold hands?’ Twenty years. We’ve been married 20 years!”

Home life in New York was routine. Iman revealed to Harper’s Bazaar in 2010 that like many couples with a young child, daily life involved early morning school runs and soccer and music classes. “I vowed to myself when I got married that I would cook every night,” she said. “I find it very therapeutic.” Bowie, who retired from touring in 2004, told ET that “first for me is our marriage and second is career. If there was a choice between one or the other, there’s no question.”

“David is more of a homebody than I am,” Iman once said of her husband. “At least I go to parties once in a while. I also think there is nothing that he hasn’t seen. He’s been to all the parties that there are.”

Twenty years into the marriage, Iman told Bazaar how enthralled she still was with her husband. “David doesn’t fight. He is English, so he just stays quiet. I’m the screamer,” she said. “Then he always makes me laugh. It’s like cabaret. I keep him entertained, too. I still fancy him—totally!—after all these years.”

So intense was their desire for privacy, the world was left shocked when Bowie died on 10 January, 2016 at age 69 from liver cancer. Even his close musical collaborators had no idea the prolific singer had been sick. Iman eschewed any public discourse on the subject, only commemorating their love on social media on occasions such as their anniversary, on Valentine’s Day and on the anniversary of his death, including: “My favorite love story is ours! #BowieForever #ForeverAndEver.”

Two years later, Iman opened up about her feelings during an interview with Porter magazine. “Sometimes, I don’t want people to know how sad I am. People say to me, ‘Oh, you’re so strong.’ I’m not strong—I am just trying to keep it together.”

When questioned about whether she would consider entering into a new romantic relationship, the model-turned-entrepreneur was firm in her response: “I will never remarry. I mentioned my husband the other day with someone, and they said to me, ‘You mean your late husband?’ I said, no, he is always going to be my husband. … I do feel very lonely. But do I want a relationship? I can’t say never, but no, not now.”