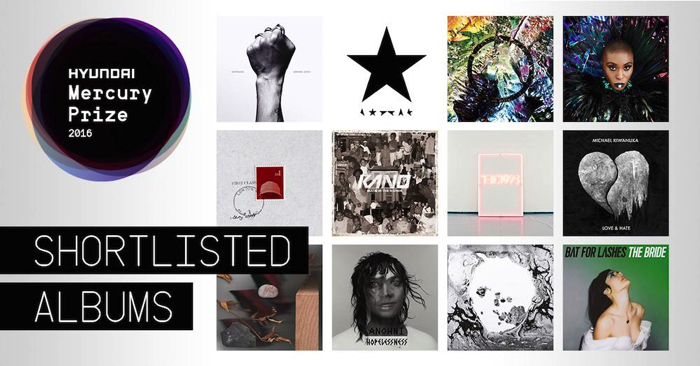 David Bowie, Radiohead, and the 1975 are the big names among the 12 nominees for the 2016 Mercury Prize, an award selected by an elite panel of music industry insiders and annually given to the best album created by a British artist.

The finalists were revealed Thursday, and Bowie is the name that most stands out. The late performer’s Blackstar is regarded as one of the best albums of the year, and given the outpouring of affection directed his way after he passed away in January, Bowie could be a strong contender to win the Mercury Prize. Bowie was a finalist twice before – in 2002 for Heathen and in 2013 for The Next Day.

ANOHNI: Hopelessness
Bat For Lashes: The Bride
David Bowie: Blackstar
Jamie Woon: Making Time
Kano: Made in the Manor
Laura Mvula: The Dreaming Room
Michael Kiwanuka: Love & Hate
Radiohead: A Moon Shaped Pool
Savages: Adore Life
Skepta: Konnichiwa
The 1975: I like it when you sleep, for you are so beautiful yet so unaware of it
The Comet Is Coming: Channel the Spirits

Established in 1992 and open to acts from Britain and Ireland, the Mercury Prize often favours the eclectic and obscure over better-known performers.

Some winners, including Arctic Monkeys and Elbow, have gone on to mainstream fame, while others have failed to break through.

Mercury Prize for his album ‘Blackstar’.

Ladbrokes has made ‘Blackstar’ the early favourite with odds of 2/1 though both Radiohead and Anohni are close contenders for the coveted prize.

Both Radiohead’s ‘Moon Shaped Pool’ and Anohni’s ‘Hopelessness’ are priced at 5/1.

Bowie’s Blackstar was released a mere two days prior to his death, and co-producer Tony Visconti has referred to the legend’s 25th studio album as his “parting gift.”

Despite the odds, a look back at the history of the Mercury Prize could lead you away from placing a wager on Radiohead; the band has been nominated five times but is yet to win even once.

The 2015 Mercury Prize winner was Benjamin Clementine, with three groups preceding him as winners in the form of Young Fathers (2014), James Blake (2013) and Alt-J (2012) respectively.

The prize was first established in 1992 as an alternative to the Brit Awards. It was formerly known as the Mercury Music Prize, and since 1992 groups have won 17 times with individuals, including Dizzee Rascal and PJ harvey amongst others, winning on seven occasions. Bowie would be the first to win the award posthumously and in an NME poll on the matter 36% of readers stated their opinion that it should go to the late musician.