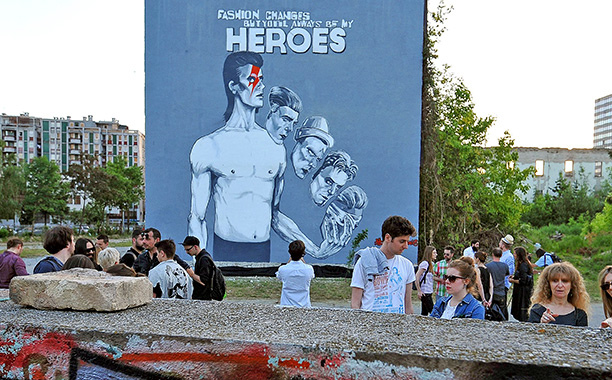 Another tribute to David Bowie has been erected – this time in Sarajevo, Bosnia. A group of artists unveiled a stunning 43-foot high mural honoring the late musician for his humanitarian work during the Bosnian war.

Reuters reports that the group played his 1969 song “Space Oddity” as they debuted the project for a crowd of 300 people this weekend. Colored with a gray scale and flecks of red, the mural reads, “Fashion changes, but you’ll always be my heroes,” and features an Ziggy Stardust-era version of Bowie, and four other Bowie faces from different eras of his career. The faces fall in a cascade, ending with his most recent Blackstar persona, which shows a bandage wrapped around his eyes.

Bowie, who had made political statements in his music and his personal life throughout his entire career, had raised money for humanitarian efforts during the Bosnian war and in 1994 he bought one of Peter Howson’s anti-war paintings, which depicted a Bosnian woman’s suffering.

The mural stands on a street formally known as Sniper Alley and was created by local artists Marvel illustrator Enis Cisic and Zoran Herceg. The location was chosen because the building was at the center of the Bosnian war in the ’90s.