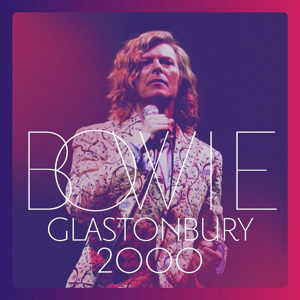 On November 30th 2018, Parlophone Records, BBC Studios, and Glastonbury Festivals Ltd. released David Bowie Glastonbury 2000, on 2 CD/DVD, 3 LP, 2 CD formats, in both standard and high-resolution digital formats.
The film documents Bowie’s legendary Sunday night headlining performance on June 25th, 2000, at one of the most famous festivals on earth. The package will include the full 21-song greatest-hits set and, for the first time, a DVD of the entire David Bowie show (only 37 minutes of which has ever been broadcast on TV).

Glastonbury 2000 is a live album by English musician David Bowie. It was recorded during his Sunday night headline slot at the Glastonbury Festival on 25 June 2000.
Glastonbury co-organiser Emily Eavis commented, “I often get asked what the best set I’ve seen here at Glastonbury is, and Bowie’s 2000 performance is always one which I think of first. It was spellbinding; he had an absolutely enormous crowd transfixed. I think Bowie had a very deep relationship with Worthy Farm and he told some wonderful stories about his first time at the Festival in 1971, when he stayed at the farmhouse and performed at 6am as the sun was rising. And he just played the perfect headline set. It really was a very special and emotional show.”
Emily’s father Michael, the founder of the festival who first met Bowie at Glastonbury in 1971, said: “He’s one of the three greatest of all-time: Frank Sinatra, Elvis Presley and David Bowie.”