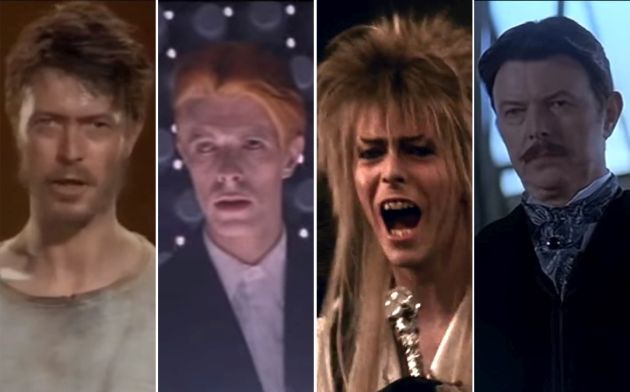 David Bowie had nearly as many on-screen personas as he did musical ones. That added another dimension to a career that can’t be defined solely by albums and songs. It was no accident, either. Bowie put no small amount of effort into his film sideline. For instance, in the years between his first few singles and the fame that came with Space Oddity, Bowie studied dance and mime under Lindsay Kemp. “Firstly, I told him that I wanted to see his spirit dancing,” Kemp has said. “I really believe that movement is the soul’s desire to be free. And therefore had to begin by kind of freeing him from his timidity, his shyness. I mean he was very keen – he had the desire, God knows – but it took a lot of gymnastics, physical work, to make his body more flexible. He certainly had the imagination of the dancer. But I told him, I encouraged him to be more audacious, you know, more experimental – to take risks and so on.” One pursuit, it turned out, fed into the other. The things he sought out of dance not only influenced his acting, but also Bowie’s sense of presentation in both music and videos. Along the way, he only had a handful of leading roles; most of the time, he was part of the supporting cast or had a cameo. Sometimes he even played himself, putting a twist on his public image. A David Bowie appearance might not have always guaranteed critical acclaim, but – as you’ll see in our comprehensive look back – it was usually a sign that the work would be creative and imaginative.

Bowie’s first role was in this black-and-white short. The two-character, 14-minute movie concerned a boy (Bowie) who steps out of a painting and proceeds to terrorize the artist.

Theatre 625 was an early BBC series, documenting different plays. “The Pistol Shot,” which included a Bowie scene choreographed by Kemp and featuring future girlfriend Hermione Farthingale, was based on an Alexander Pushkin short story called “The Shot.”

Bowie’s only in this shot for two seconds, which is probably why he wasn’t credited. But those two seconds are pretty funny. Look for him in the background.

1970
‘Pierrot in Turquoise’ or ‘The Looking Glass Murders’
Cloud

Another of Bowie’s projects with Lindsay Kemp Pierrot in Turquoise, also known as The Looking Glass Murders. A 1969 performance was filmed and broadcast on Scottish television a year later. In addition to playing the role of Cloud, Bowie also composed and sang the songs.

1976
‘The Man Who Fell to Earth’
Thomas Jerome Newton

David Bowie landed his first leading role in the feature film The Man Who Fell to Earth. His performance as an alien from a drought-stricken planet earned mostly positive reviews, and opened the door for more consistent work in front of the camera.

In this cautionary tale of a young girl pulled into the darker side of the disco scene, Bowie makes his first cameo as himself — a practice he would utilize to good effect throughout his career.

In 1982, Bowie played the title role in an adaptation of Bertolt Brecht’s Baal. He also released an album of five songs from the play.

This animated take on The Snowman, a children’s book, originally arrived in the early ’80s. Later versions included a new introduction which featured Bowie as the grown-up version of the cartoon’s main character.

This atmospheric vampire thriller features David Bowie and Susan Sarandon as vampire lovers. While generally panned by critics upon its release, The Hunger still enjoys a strong cult following. In 2009, Warner Bros. Pictures announced plans to remake it.

In this film about a World War II Japanese prison camp, Bowie plays a guilt-ridden prisoner of war. This role ended up being one of Bowie’s best performances.

David Bowie was a man of many talents. In this brief, uncredited appearance in the comedy Yellowbeard, starring Monty Python member Eric Idle, Bowie shows his comedic side.

Jazzin’ for Blue Jean may sound like your dad’s garage rock cover band, but it’s actually the title of a short film made by David Bowie and Julien Temple in 1984.

In this John Landis comedy, Bowie plays a greasy hitman chasing after Jeff Goldblum and Michelle Pfeiffer. This movie is noteworthy for at least one great reason: it includes a scene of David Bowie in a brutal knife fight with rockabilly legend Carl Perkins.

David Bowie stars alongside Ray Davies and R&B singer Sade in this musical adaptation of Colin MacInnes’ novel about teenagers in 1958 London. Unfortunately, it was a commercial failure, contributing to the demise of Goldcrest, the studio that produced it.

On the other hand, 1986 also saw the release of a signature film for Bowie as he played Jareth the Goblin King in Jim Henson’s Labyrinth. A huge success, the role became one of Bowie’s most memorable personas.

In The Last Temptation of Christ, Bowie portrays Pontius Pilate. While he did an amazing job, he was director Martin Scorsese‘s second choice, after Police frontman Sting turned down the role.

In this goofy comedy, David Bowie played a bartender who goes along with a heist in order to win the heart of his friend Lucy, played by Rosanna Arquette.

In an episode of HBO’s early-’90s sitcom Dream On, Bowie again showed off his comedic chops, playing a world-famous but obnoxious film director.

Filmmaker David Lynch has a knack for creating and casting memorable characters. David Bowie as prodigal agent Phillip Jeffries is as memorable as he is unsettling.

Full Stretch was a sitcom about an athlete-turned limousine service owner. Bowie makes his appearance at 8:09, once again reprising the role of himself.

In this Western, Bowie plays a gunslinger who tracks down another gunslinger, played by Harvey Keitel, with murderous intent. It’s a chilling portrayal of a unique villain.

Everybody Loves Sunshine is a British film about two friends fresh out of prison. Bowie plays one of the friends, intent on becoming a successful gangster.

Always interested in new territories in media, Bowie lent his talents to a video game in 1999. He played two different characters, as well as lending some music to the project.

David Bowie was the host of this campy horror series, wherein each episode told a different story. While it shared a name with Bowie’s 1983 vampire movie, the TV version of The Hunger bore no other resemblance to the film. The video below is somewhat NSFW.

Empty is a four-minute short by Tony Oursler created for a multimedia art installation. Bowie’s disembodied head provides the narration.

David Bowie’s short appearance as himself, refereeing a walk-off between Ben Stiller and Owen Wilson, is one of the many highlights in the comedy Zoolander.

David Bowie makes possibly the shortest cameo of his career in the pilot of the British comedy Nathan Barley. A photograph of him – urinating into a toaster, and quite NSFW – flashes on the screen for a second or two. You can see it at 0:16.

Bowie pops in to ruin British comedian Ricky Gervais‘ day in this episode of Extras. Gervais’ character, an actor, confides to Bowie at a party about his career dilemma, looking for guidance. Bowie proceeds to make up a song mocking him, much to the delight of the other party-goers.

Filmmaker Christopher Nolan said he couldn’t imagine anyone else in the role of Nikola Tesla in The Prestige. He was right. Bowie does an excellent job playing the enigmatic inventor.

2006
‘Arthur and the Invisibles’
Maltazard

Bowie plays the bad guy Maltazard in Luc Besson’s children’s classic. Bowie’s not the only pop star in the movie, either, as Madonna and Snoop Dogg both contribute, as well.

Bowie’s vocal talents served well for the role of Lord Royal Highness, or LRH, as his friends call him. Last year, he was reportedly working on music for a Spongebob Broadway musical, as well.

August is the story of two brothers who become successful dot-com owners, only to face their company’s demise. David Bowie appears as an investor, complicating matters.

In Bandslam, David Bowie once more plays himself, this time discovering the music of the movie’s youthful protagonists and contacting them personally.

Read More: David Bowie, Actor: A Complete Look Back at His Film and TV Career | http://ultimateclassicrock.com/david-bowie-acting-career/?trackback=tsmclip