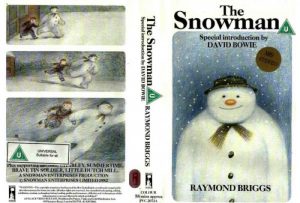 The Snowman is a children’s picture book without words by English author Raymond Briggs, first published in 1978 by Hamish Hamilton in the U.K., and published by Random House in the U.S. that November. In Britain it was highly commended runner up for the Kate Greenaway Medal from the Library Association, recognising the year’s best children’s book illustration by a British subject.[a] In the U.S. it was named to the Lewis Carroll Shelf Award list in 1979.

In summer 1984, Iain Harvey was in London’s Charlotte Mews, behind the offices of the animation company TVC. He was wondering how, in four years, he had gone from being finance director at publisher Hamish Hamilton and being interested in doing something with a remaindered children’s book, to being a film producer about to see David Bowie, his teenage pop hero, in his movie. “When he came, he was so modest and unshowy,” recalls Harvey. “I remember him talking about his Brixton days, quite naturally, when I’d said about seeing him at Brixton in the 70s. He was an absolute gem.”

A man with ice-blond hair walks into an unlit, gloomy attic, snow falling outside, dusty memories in his mind. He kneels down by a rocking-horse and tells us of his childhood, of holidays by the seaside, of winters returning home, of being around the fire, and of making snowmen. “One year, I made a really big snowman,” says Bowie, pulling a blue scarf out of a drawer; it is dotted with snowmen, green-hatted and coal-eyed. “He got me this scarf. You see,” he says tenderly, “he was a real snowman.”

For millions of us, Christmas TV wouldn’t be the same without the animated adaptation of Raymond Briggs’s The Snowman, made in 1982. For those of us who remember Bowie’s introduction, where he frames himself as the boy who made and loved and lost a special friend, this dreamlike detail of the season takes on new poignancy now. 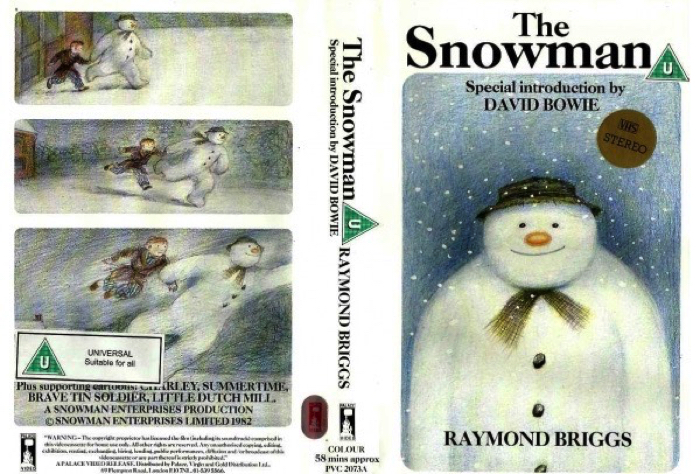 Scour the Bowie books, however, and details of how he got involved prove hard to find. It’s not that he shied away from kids’ projects. He was a father before fame really hit, and he narrated Prokofiev’s Peter and the Wolf in 1977, saying he did it for his son, Duncan Jones. Nine years later, he introduced a generation of kids to frightwigs and latex in Jim Henson’s Labyrinth. But The Snowman came during an odd period in Bowie’s creative life, when grownup film roles were taking him into darker, stranger places, while his 1983 album, Let’s Dance, and the Serious Moonlight Tour, took him to his international commercial peak.

Several members of The Snowman team remember Bowie well, though. His section was not part of the original film, which began with Briggs introducing his story to viewers. Bowie’s involvement came after the public had already seen and fallen in love with the film.

The story of The Snowman, like Bowie’s, is surprisingly slow-burning. First published in 1978, it sold well initially, but a second print run stalled. “We had a basement of 50,000 books, basically, until the film came out,” says Harvey, then at Hamish Hamilton, before he became executive producer of the film version. Producer John Coates, of TVC, took out an option on the book for a year in 1980, making an animated storyboard of it only when the year was nearly out. In March 1982, new TV network Channel 4 offered to fund the film, which was broadcast on Boxing Day that year, beginning with Briggs walking through a snowy field near his rural Sussex home, the opening that was used for the first two years.

In January 1983, The Snowman was nominated for the Oscar for best animated short film, but it didn’t win. The growing popularity of home video pushed its appeal, though, and US networks became interested. However, they didn’t understand the appeal of Briggs’s introduction. “We didn’t realise that in the US programmes were sponsored, and to be sponsored you needed a big name,” Harvey says. Then along came Bowie.

By early 1984, Blake’s Snowman soundtrack was starting to sell well, driven by the song Walking in the Air. The US label CBS was also involved in the effort to take The Snowman to America.

“People such as Laurence Olivier and Julie Andrews were being suggested [for a new introduction], but the Americans were going, it must be a rock star,” Blake says. “‘Like Mick Jagger?’ I remember saying. And they were all, ‘That would be great!’” Blake talked to Coates about Bowie; the singer had already got in touch with Coates offering his services for When the Wind Blows. Harvey also had a connection to Bowie through Jeremy Isaacs, producer of the prisoner-of-war drama Merry Christmas Mr Lawrence, in which Bowie starred in 1983. “Jeremy said we should push our luck, although we were fairly nervous to do it,” Harvey remembers. “It quickly became clear Bowie was happy to do it.”

The script for the new introduction span off from Briggs’s original, which talked about a snowy day full of “light and silence”. Harvey doesn’t remember who adapted it for the film, but he thinks part of it might have been improvised. Briggs was also on-set on the day, not minding that his introduction was being superseded; he admits now that the story about a snowy day inspiring the book “was total rubbish, of course”. He never saw the results of Bowie’s work, but he has warm memories of meeting him.

“I remember us all lining up to shake his hand like he was the Queen,” Briggs says. “He was wearing these amazing pink shoes, and his face was wonderful to look at – those different-coloured eyes. A charming bloke.” Bowie shook Briggs’s hand firmly and said he liked his work; two years later, he contributed the title track to the film version of When the Wind Blows, releasing it as a single in June 1986 (he had intended to do the whole soundtrack, but under pressure from EMI to focus on the follow-up to 1984’s Tonight, he had to withdraw).

Snowman storyboard artist Joanna Harrison also animated Bowie for the video to the single; she had been at TVC’s offices in London when Bowie came in to film. She was responsible for the chunk of The Snowman set in the North Pole, in which Father Christmas adds the name James to the tag on the present the boy receives there. It was the name of Harrison’s then-boyfriend, who became, and still is, her husband.

In summer 1984, they were dating. “James was a huge Bowie fan, and I’d taken his copy of Station to Station along to be signed, with a big, black felt-tipped pen. We were all hanging out in reception, desperately overexcited.” But then Bowie’s security arrived; only the top TVC team were allowed in. This was especially unfair, Harrison felt, as she had contributed something important to the singer’s scene: the hand-stitched green hats and coal eyes on the machine-knitted snowmen dotting Bowie’s blue scarf. There had actually been two scarves, she says. “Bernard Cribbins got the other [he recorded the audiobook], but he left his in the back of a taxi. We heard that Bowie gave his to his son.”

Another dreamlike detail remains with Harrison, too. On returning to work the day after filming, she discovered that Bowie had, after all, signed James’s copy of Station to Station with her felt-tip. After Bowie’s death, the couple dug it out, recalling a dusty old memory.

In the great array of Bowie’s work, a short introduction to a 26-minute animation isn’t one of the key pieces. It’s hardly Ziggy Stardust or Low. But it is proof of his willingness to work on the unlikeliest of projects, and the sprinkling of magic he could bring to them. It would have been easy for the massive star to overshadow The Snowman, but that wasn’t what happened. Instead, Harvey remembers a man “clever enough and modest enough not take The Snowman away from what it was, which was this perfect little film, this timeless moment”.