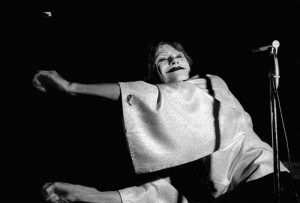 David Bowie Pierrot in Turquoise or The Looking Glass Murders (1970)

Description:
A story in mime of Pierrot’s love for Columbine, how she spurns him for Harlequin and Pierrot’s subsequent revenge. Stars David Bowie.

Shotlist:
Credits (0.48); C/u Pierrot’s ecstatic/weeping face, intercut with photographs of the cast in rehearsal (4.43) Pierrot applies makeup at a dressing table, Columbine appears to him in a mirror, Pierrot follows her through the glass and kisses her (8.10) Harlequin knits on a bed, rises and passes through the mirror (9.17) Pierrot embraces Columbine, Harlequin enters to find them amongst nude shop mannequins, Bowie sings of Harlequin “on a downer” (11.00) Columbine finds Harlequin amongst the mannequins and kisses him; Harlequin follows Columbine (12.08) Columbine and Harlequin dance, intercut with etched images of Victorian audiences (13.24) neg image Bowie superimposed over image of etching, Harlequin and Columbine run from the stage (12.53) Harlequin and Columbine embrace (14.53) Brief shot of two clown automatons (15.01) Pierrot re-enters by the mirror, Bowie singing; Columbine and Harlequin enter and climb into bed together; Pierrot weeps (17.23) Columbine dances, [an effect has been used to reduce the resolution of the image, and render it a golden colour] (18.28) Pierrot picks up a flower (19.06) Columbine rises and passes him (20.06) Pierrot and Columbine appear on a stage, Pierrot’s flower is dropped for Harlequins bouquet, Pierrot puts out Harlequins eye (22.30) Harlequin chases Columbine and murders her (23.40) Bowie dressed as a clown, sings (25.10); End credits (27.20)

Before his commercial breakthrough as a musician, with songs like ‘Space Oddity’, ‘Starman’, ‘Fame’ and more, David Bowie had a passion for performing, and he adored the idea of acting. He would appear in over 30 movies, TV shows, and theatrical productions throughout his career. Even though Bowie always had an interest in music and worked with various musicians on multiple occasions to release his own music, he also had an immense passion for acting. He studied dramatic arts under Lindsay Kemp, from avant-garde theatre and mime to ‘commedia dell’arte’.

When asked about David, later in an interview, Lindsay said, “Even before meeting, David and I had felt the need to work together. I’d identified myself with his songs, and he’d seen my performances and identified himself with my songs. I was singing the songs of my life with my body; he was singing the songs of his life very fabulously with his voice, and we reckoned that by putting the two together the audience couldn’t help but be enthralled. In other words, one large gin is very nice, but two large gins are even nicer.”

The “two large gins”, as Kemp put it, came together for his 1967 theatrical production of Pierrot in Turquoise. By this point, Bowie was enthralled by the Buddhist philosophy and suggested ‘turquoise’ for the title of the play, which represented ‘eternity’ in Buddhism. Bowie wrote and sang the songs that were featured in the pantomime, as well as playing the role of the Cloud, a character who acted as the narrator in the play. Pierrot in Turquoise was later filmed for Scottish TV and aired as The Looking Glass Murders in 1970.

Bowie wrote and performed four songs for the production. His character, the Cloud, sang these songs at crucial moments in the play, often voicing Pierrot, the protagonist’s thoughts, or singing at him, or singing about him and sometimes even narrating the story through the songs. ‘When I Live My Dream’ – that featured both at the beginning and the end of the play, spoke of Pierrot living his dreams where he’d be together with the woman he loved, Columbine. The song spoke simultaneously of his dreams and his woes, making it the perfect track that would set the tone for both the start and the end of the play.

Another track, ‘Columbine’ was titled after the woman Pierrot loved. The song mentioned Harlequin- Columbine’s lover and the man she left Pierrot for. ‘Threepenny Pierrot’ was directed towards Pierrot, with lines like, “Threepenny Pierrot – we love you”, and then towards the audience, “Threepenny Pierrot – loves us too”. ‘Threepenny Pierrot’ was later re-written as ‘London Bye Ta-Ta’, with a few changes. ‘The Mirror’, another stellar effort, revolved around Harlequin and how he was “quite an exception”, perhaps for both the better and the worse. Both ‘The Mirror’ and ‘Columbine’ were very different from Bowie’s initial music style with folk-ish melody and rhythm. However, these styles found their place later in his Space Oddity LP.

‘Threepenny Pierrot’, ‘Columbine’ and ‘The Mirror’ were debuted at the premiere of Pierrot in Turquoise on 28th December 1967 in Oxford. The only recordings of these songs were from ‘The Looking Glass Murders’ (1970).

David Bowie’s acting career, although lesser known when compared to his musical accomplishments, influenced him all through his life. It inspired him to create and execute his musical persona of Ziggy Stardust. Apart from The Looking Glass Murders, David Bowie held leading roles in a number of films including The Man Who Fell to Earth (1976), Labyrinth (1986), and many others and also appeared in a supporting role or cameo in The Last Temptation of Christ (1988) and Zoolander (2001). He also bagged a Daytime Emmy Award in the category of Outstanding Special Class Special in 2003 for Hollywood Rocks the Movies: The 1970s with David Bowie (AMC)’.