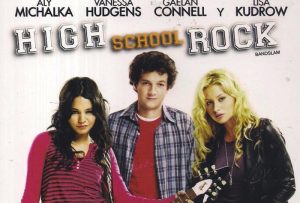 Bandslam is a 2009 American musical and romantic comedy film produced by Summit Entertainment and Walden Media. Written by Josh Cagan and Todd Graff, it stars Aly Michalka, Vanessa Hudgens, Gaelan Connell, Lisa Kudrow, Scott Porter,[1] Ryan Donowho, and Tim Jo. The story revolves around Will and Charlotte, who form an unlikely bond through their shared love of music. Assembling a like-minded crew of misfits, the friends form a rock group and perform in a battle of the bands competition called “Bandslam”.

Bandslam was shot in Austin, Texas, with additional scenes filmed in New York City.[2] The film generated mostly positive reviews but it failed to chart in the top 10 when it was released on August 14, 2009