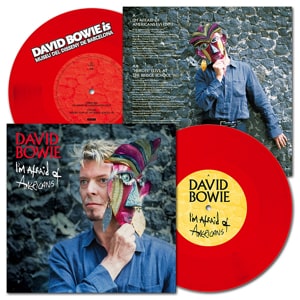 To celebrate the next leg of the record-breaking David Bowie Is exhibition at Museu Del Disseny De Barcelona, a limited edition red vinyl of I’m Afraid Of Americans will be making its 7” debut exclusively at the venue only, on May 25th.

The Trent Reznor remixed V1 edit of the track is the A-side, while the AA-side is an acoustic version of “Heroes”, recorded live at The Bridge School Benefit in 1996, where DB was backed by Reeves Gabrels and Gail Ann Dorsey.

The artwork for the single features two photographs by renowned Mexican photographer, Fernando Aceves, who took a series of beautiful shots of David while he was in Mexico City during the Earthling tour in October 1997.

20 years on from their first release, both tracks and the sleeve imagery have a renewed resonance in 2017.

AA- Side “HEROES” (live at The Bridge School ’96)
(Bowie/Eno)
Produced by John Hanlon
Mixed by John Hanlon at Redwood Digital, Woodside, California
This acoustic version of “Heroes” was recorded at the Shoreline Amphitheatre, Mountain View, California on 20th October 1996.