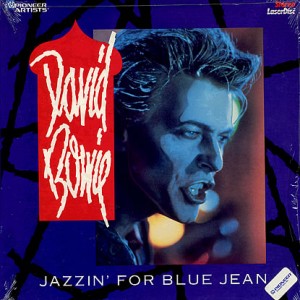 Jazzin’ for Blue Jean is a 20-minute short film featuring David Bowie and directed by Julien Temple.[1] It was created to promote Bowie’s single “Blue Jean” in 1984[2] and released as a video single.

The film depicts the adventures of the socially incompetent Vic (played by Bowie) as he tries to win the affections of a beautiful girl by claiming to personally know her favourite rock star, Screaming Lord Byron (also played by Bowie). Rightfully disbelieving him, she challenges Vic to introduce her to him. They make a date for a Screaming Lord Byron show, where Vic attempts to sneak backstage to convince Mr. Screaming to come say hello to him and the girl after the show.

Screaming does come to Vic’s table after the show and says hello to him and the girl, but the girl and Screaming Lord Byron have already met (in Peru), and she leaves with the rock star instead of Vic. As they drive off, Bowie breaks the fourth wall and asks the director why the story changed from his concept.