Blackstar video: a gift of sound and vision

Is 10 minutes too long for a music video? It’s a good question, because David Bowie has just put out a chunky promo for his new track Blackstar, which the time counter tells us is nine mins and 59 seconds long.

Bowie has got form in this area: not least the epic 20-minuter for Jazzin’ for Blue Jean, featuring Bowie’s terrible mockney accent (as ever with Bowie, well ahead of its time). Alexis Petridis has already had his say about how Blackstar stacks up musically, but how about visually, as cinema?

This Blackstar mini-epic, visually at least, belongs in the surreal, dream-logic era of the music video that Bowie himself mastered in the early 80s with Ashes to Ashes. Music videos have moved on – through the Spike Jonze, Hype Williams and Chris Cunningham eras – but Bowie’s have basically stayed the same, even if the budgets have gone up.

Blackstar begins with its own bit of ancestor worship, with a spaceman – possibly strung out in heavens high – lolling around on some rocks on a set alarmingly reminiscent of the asteroid-blasting blockbuster Armageddon; quite what the Anne Hathaway lookalike with an Angelina Ballerina mouse tail is doing there is anyone’s guess. Bowie himself, with head bandaged and eyes replaced by buttons (think Neil Gaiman’s Coraline) is a fantastically creepy image. And he isn’t trying to disguise his age – the angled lighting only accentuates his stately facial lines.

It’s also fair to say that Johan Renck, the Swedish TV director who persuaded Bowie to write the theme song to his crime series The Last Panthers, is orchestrating a mix of cinematic techniques. There are rather nice refractions, lens flare and focus jumps. It is what you might call performative, or plastic: the Pina Bausch-esque dancers, the wax dripping candle, the ritual display of the Damien Hirst-y skull, the Soviet-Maoist shot of Bowie holding up a Blackstar book. (I’m less keen on the deliberately fake-looking, set-built backdrops that litter the video: a tired tactic of artist-film-makers getting all excited about the “artificiality” of film.) 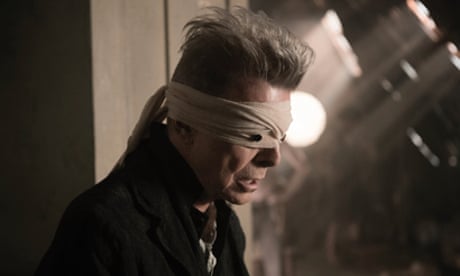 David Bowie: Blackstar review – ‘As a taster for the forthcoming album, it works perfectly’

By the time the scarecrows writhing on crucifixes show up, about two-thirds of the way through, you can tell the well of imagery is beginning to run dry: there’s only so much surrealism you can throw at a wall before coherence starts to disintegrate. But as is often the case with arty-farty promos, it’s the music chugging away in the background that holds things together, pasting over the sense and meaning gaps that, in other circumstances, would look furiously self-indulgent.

Interestingly, Renck suggested that it was a particular physical tic that interested Bowie – the repetitive motion of background characters in Popeye cartoons – and that perhaps led to the contempo-dance sequences. (Bowie has been here before: the distinctive style of the New Killer Star promo was obviously inspired by those funny lenticular images.) But essentially, this is a straightforward example of a surreal dream-logic film that tries to sustain itself a bit too long.

In the past, Bowie has gone for rather more cutting-edge promos – such as the Tilda Swinton-starring The Stars (Are Out Tonight) or Where Are We Now? – but they’ve never been entirely satisfactory, perhaps because Bowie seems to ignore top-notch film directors in favour of artist-multimedia types. You sort of wish he would go the whole hog and commission something like Daft Punk’s Da Funk or – one of my personal favourites – The Chemical Brothers’ Star Guitar. Perhaps – gulp – it’s time to get young Duncan Jones involved. It could be the way forward.

VIDEO :Death at Work. The mirror sees it all.

David Bowie A Look Back at His ’90s Era